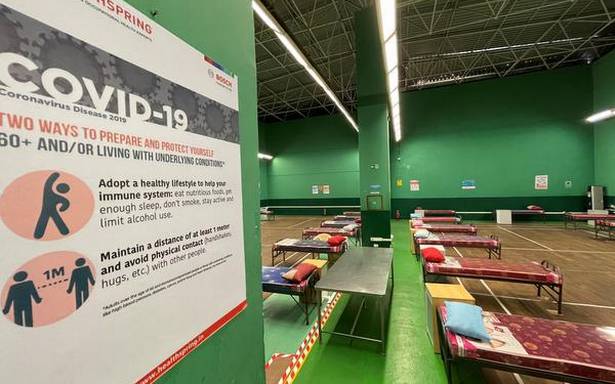 Following a surge in COVID-19 cases in Bengaluru, the civic body has wasted no time in rolling out vaccination session sites at apartment complexes, slums and campuses of industries, including tech parks and multinational corporations.

Bruhat Bengaluru Mahanagara Palike Special Commissioner (Health) P. Rajendra Cholan told The Hindu that session sites were being opened in apartments that had tied up with private medical establishments. Nearly 3,500 big apartment complexes in the city had been identified with help from Bangalore Apartments’ Federation and mapped with the nearest private medical establishments.

Vaccination sites have also been opened at Embassy Manyata Business Park, Embassy TechVillage and the Infosys campus. A press release from Embassy REIT said their target was to vaccinate 1,450 staff over the next 10 days.

According to Mr. Cholan, with the rollout of new vaccination sites or sub-centres, the average vaccinations per day has increased from 35,000 to around 45,000. “The biggest challenge earlier was to get residents of apartments vaccinated. By opening sub-centres in the communities itself, we have seen a rise in the number of residents coming forward to get vaccinated,” he said.

Meanwhile, the BBMP has been directed to vaccinate five lakh citizens residing in South zone over the next 15 days by setting up more session sites in apartments, club houses and other public places. This was one of the decisions taken at a meeting chaired by Revenue Minister R. Ashok and Bengaluru (South) MP Tejasvi Surya.

BBMP Chief Commissioner Gaurav Gupta inspected the proposed COVID-19 Care Centre (CCC) set up by BOSCH that will be operational in two days.