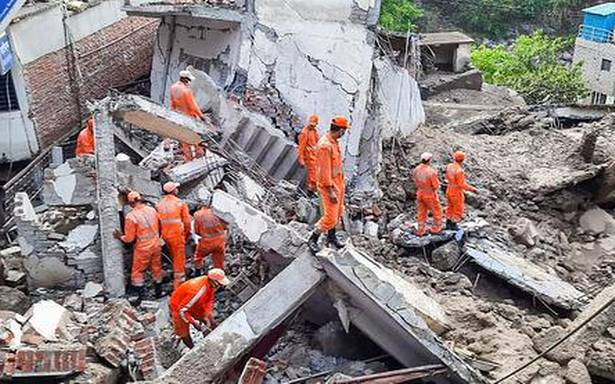 The cloudburst on Tuesday razed two municipal buildings to the ground and damaged several shops.

A day after a cloudburst hit Devprayag in Tehri district, Uttarakhand Chief Minister Tirath Singh Rawat on Wednesday visited the affected areas along with his Ministerial colleagues for an on-the-spot assessment of the situation. Accompanied by Cabinet Minister Subodh Uniyal, Disaster Management Minister Dhan Singh Rawat and local MLA Vinod Kandari, the Chief Minister also met the affected people and assured them of all help. He asked District Magistrate Iva Shrivastava to extend assistance to the affected people at the earliest.

The cloudburst occurred over the Shanta river causing inundation of areas along its banks. A number of shops in Dashrath Danda Parvat area of Devprayag were also damaged in the cloudburst. However, there was no loss of life as people had moved to safe locations.