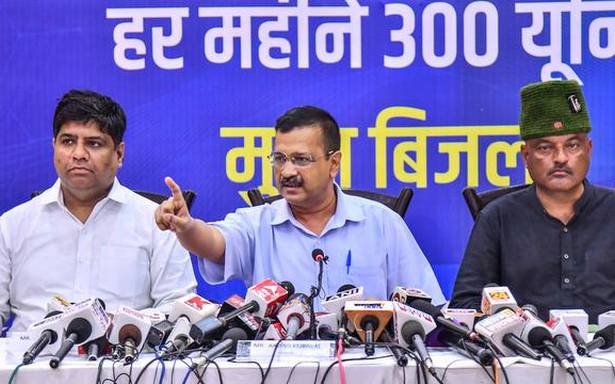 If voted to power, the Aam Aadmi Party, under the leadership of Ajay Kothiyal, will make Uttarakhand the global spiritual capital for Hindus, Delhi CM Arvind Kejriwal said

He said Mr. Kothiyal was the principal of the Uttarkashi-based Nehru Institute of Mountaineering at the time of the Kedarnath disaster and is credited with doing commendable work in rescuing people and helping the affected put their lives back on track in the aftermath of the tragedy.

Addressing a press conference, Mr. Kejriwal said the decision to pick Mr. Kothiyal, who joined AAP in April, as the party’s CM face is based on the feedback received from people who are fed up with politicians helming the State.

“[Manish] Sisodia was here some time back. He asked people directly who should be made the party’s CM face. The response in favour of Col. Kothiyal was overwhelming.

“People here want a break from politicians who have only looted the State. They now want a soldier full of patriotic feelings as CM, who will not spend his tenure filling his coffers but serve them,” he said.

“He [Kothiyal] was battling terror and guarding the country’s frontiers when politicians were busy looting the State,” he said.

If voted to power, the Aam Aadmi Party, under the leadership of Mr. Kothiyal, will make Uttarakhand the global spiritual capital for Hindus, he added.

Describing Mr. Kothiyal as a true soldier, Mr. Kejriwal said the former Army officer is affectionately called ‘Bhole Ka Fauji’ by the locals in recognition of his work during the 2013 floods in Kedarnath.

“Col. Kothiyal is the man who helped rebuild lives in the hills after the Kedarnath disaster. He is an apolitical man with first-hand experience of the ground realities. He will use his experience of rebuilding lives in the wake of the tragedy for building a new Uttarakhand,” he said.

“With Col Kothiyal, who has direct knowledge of the ground realities as they exist in the hills, we are working on a plan to generate employment opportunities for the state’s youths,” he added.

Mr. Kothiyal thanked Mr. Kejriwal for reposing his trust in him and said he will try his best to rise to his expectations.

He asked people to give him just six months’ time to prove his mettle.

“You should let me continue only if you find me good enough,” he said.

Later, Mr. Kejriwal also met AAP office-bearers and held a roadshow from the Clock Tower in the heart of the town to Dilaram Bazar.

The AAP is the first party to declare its CM face for the Uttarakhand Assembly polls.