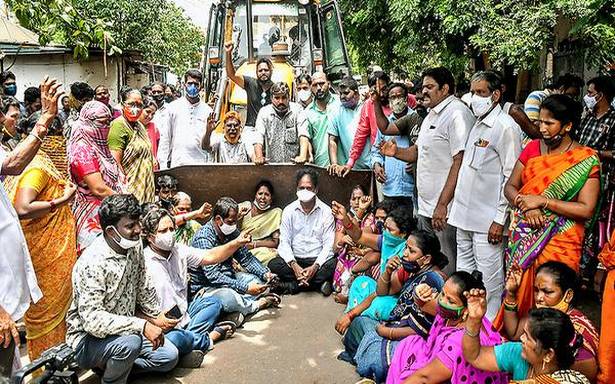 Officials from the Town Planning wing of the Greater Visakhapatnam Municipal Corporation (GVMC) partially demolished 17 shops, which were reportedly constructed encroaching roads near a school building in Woodyard street, Ward 39 in One Town in the city. Tension prevailed as the shopkeepers along with their family members stopped the GVMC officials. Visakhapatnam (South) MLA Vasupalli Ganesh Kumar reached the spot and joined the protestors.

Raising slogans against the officials, the protestors and the MLA staged a sit-in before the earthmovers and stopped the demolition activity for more than an hour. Raju, one of the shopkeepers, said that he has been dependant on the shop for the last 15 years and the demolition will affect him and his family members.

He said that around 80 to 100 people are dependant on these shops and the GVMC is demolishing them without providing any alternative. Mr. Ganesh Kumar said that the 20 odd families have been residing in One Town and earning their livelihood through these shops since the last 25 years.

He questioned how can the GVMC officials demolish the constructions without serving any kind of notice. He demanded that the civic body officials provide alternative space to the shopkeepers before demolishing their establishments.

The GVMC officials said that they had received complaints against the shops. They said that Ward No. 39 Corporator Mohammed Sadiq had complained to the GVMC that anti-social activities were taking place near the shops.