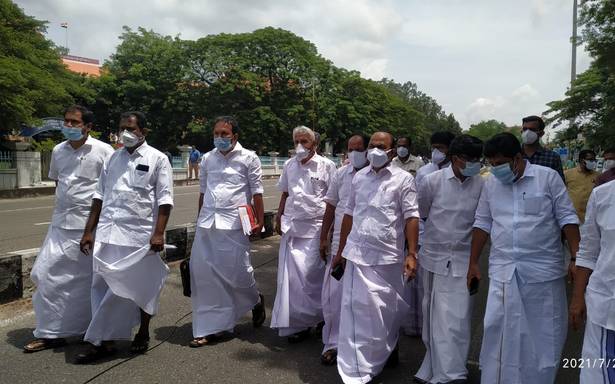 Members of the Congress-led United Democratic Front (UDF) opposition boycotted the Assembly on Thursday, accusing Chief Minister Pinarayi Vijayan of setting a wrong legislative precedent by “attempting to pick holes” in the Supreme Court’s (SC) decision to quash the government’s move to withdraw the criminal case registered against six Left Democratic Front (LDF) leaders for “creating disorder and destroying public property” in the Assembly during UDF rule on March 13, 2015.

Mr. Vijayan also rejected the opposition’s demand for the resignation of the General Education Minister V. Sivankutty, who is accused in the case, among others. The CM noted that the SC had neither mentioned the Minister by name nor passed an adverse remark against him.

Speaker M. B. Rajesh rejected the adjournment notice moved by Congress legislator P. T. Thomas to discuss the matter, prompting UDF legislators to raise anti-government slogans and troop out of the House in protest.

Opposition Leader V. D. Satheeshan said parliamentary privilege did not cover criminal acts. The immunity was only for debating and voting on issues without fear or favour.

“March 13, 2015, will be a Black Friday that will live in infamy in Kerala’s legislative history. The LDF had maliciously prevented Finance Minister K. M. Mani from presenting the budget on an unproven corruption charge relating to the reinstatement of annulled bar licenses,” he said.

Kerala Congress (M) legislators should quit the LDF if they had any self-respect or regard for their founder. They would soon realise the ruling front’s embrace was a stranglehold, he said.

Mr. Thomas said Mr. Sivankutty was no role model for students or teachers. The images of the Minister running riot in the Assembly remained vivid in public memory.

Mr. Vijayan said the court’s duty was not to “re-appreciate” a public prosecutor’s request for withdrawing a case.

The judiciary’s responsibility was limited to verifying whether the prosecutor had exercised his mind independently.

The CM said upheavals in society often echoed in the Assembly. The House was a microcosm of the State.

The Speaker had suspended the LDF MLAs in 2015 for causing uproar in the House. Further prosecution of the then LDF legislators would be tantamount to double jeopardy.

Mr. Vijayan said the Oomen Chandy government in 2015 had crossed a line by unjustifiably pushing a political protest in the Assembly into the realm of criminal prosecution.

The UDF had attempted to dismantle the protections of the parliamentary privilege granted to MLAs to raise issues in the Assembly without fear of punishment or legal action.

Similar turmoils had occurred in other legislatures in the country. However, no government had ensnared protesting members in criminal cases. Instead, they had allowed respective Speakers to decide matters.