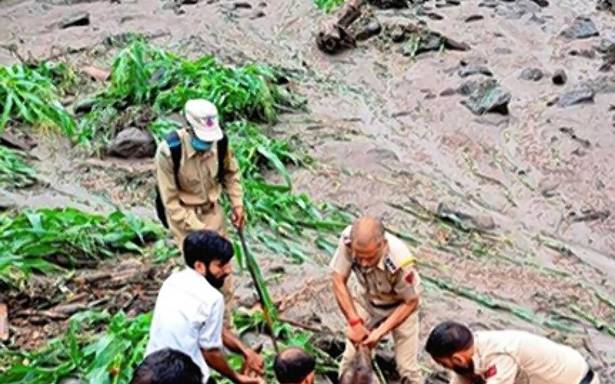 Officials said several houses have turned into a mound of debris

Rescue operations resumed on Thursday morning to trace around 19 missing locals in Honzar village of Kishtwar in the Jammu region, where a cloudburst triggered massive flash floods and left seven dead on Wednesday.

Besides the policemen, officials of the district administration, personnel of the Army and the State Disaster Relief Force were busy removing the rubble. However, the Indian Air Force (IAF) could not fly a chopper to shift the injured out of the area due to the inclement weather. Around two dozen houses and cowsheds were damaged by gushing waters after the cloudburst, which occurred in the intervening night of July 27-28.

Officials said several houses have turned into a mound of debris. Among the 19 missing localswere women, according to locals.

“There was a huge sound and then houses started caving in near the nallah [stream]. There were four houses on one side of the bank and it’s a flat surface now. It was like a doomsday,” Muhammad Jamal, a resident of Hunzar, said.

An official said camps were set up at Dangadooru and Soundar areas to dispatch relief and rescue materials for the affected people.

The government has announced an ex gratia of ₹5 lakh each for the next of kin of those who lost their lives and ₹ 50,000 and ₹12,700 under the SDRF to the grievously injured.

“In such trying times, it is our duty to care for those who have been unfortunately affected by these natural calamities,” Lt. Governor Manoj Sinha said.

The meteorological department has predicted a decrease in precipitation. “No major rain occurred during the night across Jammu and Kashmir. Occasional light rain is possible at some places during the day,” it stated.