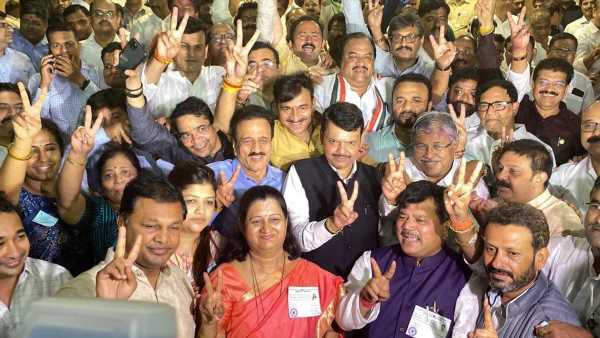 ‘The numbers may favour us now, but we are in no hurry to form the next government in Maharashtra.’

That seems to be the Bharataiya Janata Party’s state of mind in Maharashtra now as reports of 13 Shiv Sena MLAs defecting from the party and are likely to form a coalition with the BJP gain credence in the state.

However, the BJP seems to be taking a cautious approach this time round after the embarrassment it faced from the failed early morning attempt at forming a government in Maharashtra in November 2019 with the help of the Nationalist Congress Party’s Ajit Pawar.

Three senior leaders, including a former cabinet minister from the BJP, say the political situation in Maharashtra is fluid right now and remained tightlipped about their party’s plan to stage a serious comeback to power in the state.

As 13 Shiv Sena MLAs, including state Urban Development Minister Eknath Shinde, have reportedly gone missing since the legislative council election results on the night of June 20, in which the BJP trounced the Maha Vikas Aghadi yet again to get its fifth member elected, there has been strong speculation about a vertical split in the Shiv Sena.

“Let them sink under the weight of their own contradictions. We don’t have to do anything,” says the former BJP cabinet minister quoted earlier, about the BJP’s plan to form the next government in Maharashtra.

“Why should we do anything? We knew from Day One of the MVA that this is a coming together of crass opportunism. The BJP’s only agenda is Maharashtra’s development. We are not into engineering splits; they will come apart on their own,” says a senior office-bearer from the state BJP sarcastically while commenting on reports of Shinde’s absence from the state.

In the recently concluded Rajya Sabha and legislative council elections, the BJP garnered votes of 120 MLAs and 134 MLAs respectively against its official tally of 106 legislators.

Owing to this, the Shiv Sena’s Sanjay Pawar lost the Rajya Sabha election to the BJP’s Dhanajay Mahadik, and on Monday Chandrakant Handore of the Congress lost to the BJP’s Prasad Lad in the legislative council election.

After getting 133 MLAs’ votes in the legislative council election, the BJP now feels confident that it is closer to the magical 144-mark required to form a government with a simple majority in the 288-member Maharashtra Vidhan Sabha.

“The numbers may favour us now, but we are in no hurry to form the next government in Maharashtra. That always remains an option but it will all depend on what Eknath Shinde does, how many MLAs’ support he has. We will have to watch what Shinde does from here before making any serious effort to form the government,” says a BJP MLA from the state.