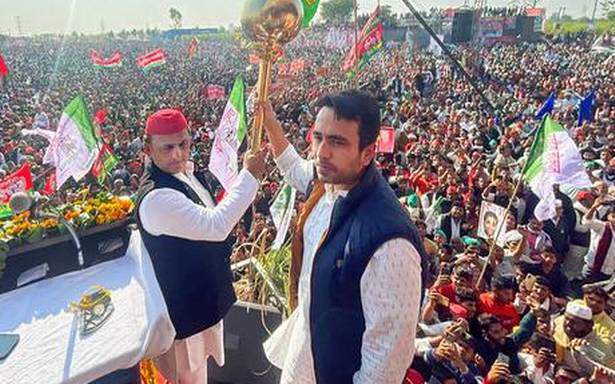 RLD’s alliance with SP has raised the heat in western U.P.

The Rashtriya Lok Dal has emerged as the biggest political beneficiary of the farmers’ agitation and poll pundits have dubbed its alliance with the Samajwadi Party as the principal opposition to the ruling Bharatiya Janata Party in western Uttar Pradesh in the upcoming Assembly elections.

Also read: In U.P., united by grievances but divided over political options

Ahead of the party’s second joint rally with the SP in the Jat-dominated Iglas town of Aligarh, observers say RLD president Jayant Singh reaching out to stakeholders during the agrarian unrest has helped revive the party in the Jat-Muslim belt.

With a dozen-plus rallies in the region during the pandemic and calling for vote ki chot on the BJP, Mr. Singh seems to have launched an aggressive campaign. The massive crowd at his first joint rally early this month with SP president Akhilesh Yadav was an indication that the transfer of votes may not be a problem.

The two parties are relying on the renewed Jat-Muslim bonhomie and also voicing concern over rising prices, joblessness and corruption. Though the seat-sharing formula is yet to be announced, party insiders say the RLD could get around 40 seats.

But a few others point out it may not be an easy ride either. It is estimated that 80% of the farmers at the Ghazipur morcha of the agitation were Jats. A section feels that Mr. Singh stood for them and, therefore, should be given a chance, while another section is wary of his alliance with Mr. Yadav, given the history of acrimony between their fathers. There is a segment of Jats that feels past could be forgotten. For them, the first choice is the RLD but the second option could still be the BJP.

Notably, at the Meerut rally on December 7, Mr. Singh graciously praised and gave his speech time to Mr. Yadav, but the SP president did not give a clear answer on appointing the former Mr Singh as the Deputy CM chief minister if voted to power.

The third section of farmers owes allegiance to the Bharatiya Kisan Union but has a soft corner for Yogi Aditynath. With the BJP repealing the farm laws and simultaneously raising the Kashi-Mathura-Aurangzeb pitch, it could be a heady concoction to resist.

However, RLD ideologue Sompal Shastri said the party would rather take on the BJP’s communal card head-on and, unlike the Congress, keep the focus on farmers’ plight and other issues.

In his opinion, the farmers’ agitation has gone against the BJP as it failed to ameliorate the cause of the community.

Mr. Shastri insists that after the Muzaffarnagar riots of 2013, Jats and Muslims have come together on their own and the Gurjars have turned against the BJP, while across the Ganga, the Yadavs are already in the fold. “The caste plus the minorities’ vote makes a winning combination.”

The RLD manifesto promises one crore jobs to youths and 50% reservation for women in government jobs. Interestingly, it is not promoting populist measures like waiving off farm loans but promising to double the amount given to farmers under the PM Kisan Samman Nidhi Yojna.

The RLD posters, this time, also prominently feature Bhimrao Ambedkar and A.P.J. Abdul Kalam, while Mr. Singh has been talking about bhaichara (brotherhood) among Hindus and Muslims and across all social classes. The party has promised a new scheme for urban labour in the name of Kanshiram, the founder of Bahujan Samaj Party with the slogan Bachcha Bachcha Bhim Ka RLD Ki Team Ka.

“The Dalits, including Jatavs, are realising that the BSP’s silence indicates its disinterest to fight the BJP and only the RLD could provide them the security in villages,” said Kaptan Singh Chahar, RLD spokesperson and Agra unit head.

According to him, both the Jat and the Dalit youth fear that the present dispensation would privatise government jobs robbing them of the benefits of reservation and pay scale. “They have already been over-exploited by neighbourhood grocery stores during the pandemic and will not buy any other argument while casting their votes,” he said.

If Mr. Singh lent political support to the farmers’ agitation, BKU leader Rakesh Tikait was the architect of the stir in west U.P. and his backing can tilt the outcome in the elections. Mr. Tikait has said he would look at what the party manifestoes offer to the farmers and has requested the parties to refrain from using his name and photograph in their posters.

It came after posters were put up by Dr.Monika, general secretary of the SC/ST cell of the RLD in Purkazi, Muzaffarnagar,

Observers say Mr. Tikait is buying time till the elections are notified because there is a section in the BKU that identifies with the nationalist agenda of the BJP. The RLD insiders dismiss it as just a facade for retaining the apolitical image of the BKU. “When Tikait urges for a vote against the BJP, it implies his support for the RLD in west U.P.,” said a party leader.