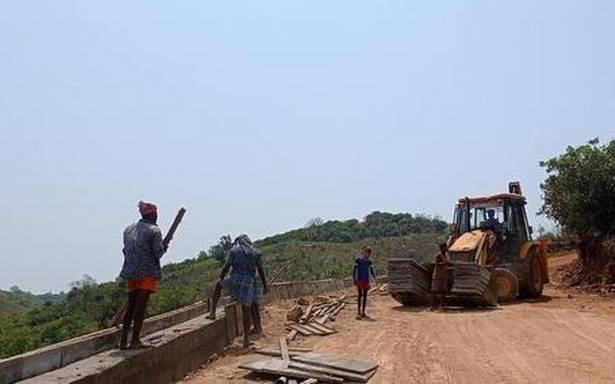 The laying of a two-km long road from Pudur to Koraiyar Falls in Pachamalai hills in Tiruchi district has gladdened the hearts of nature lovers and picnickers who frequent the place.

The work, being executed at a cost of about ₹30 lakh, provides the vital last mile connectivity to the falls, a verdant spot. The road is being laid following persistent demands from activists who have been repeatedly petitioning the district administration and even the Chief Minister’s Special Cell.

Those who visit this little-known place, on hearing about it through word of mouth, had to trek the stretch so far. “Many people who visit by cars and vans have to park their vehicles at Pudur and walk the two-km stretch as there was no proper road. Now they can drive right up to the falls,” observed Saravanan Natesan, a regular visitor to the falls. Those travelling by the Thuraiyur-Palayam State Transport Corporation bus have to alight at Pudur and go by walk. The road stretch is expected to be completed within the next couple of months, official sources indicated.

The Koraiyar falls is about 40 km away from Thuraiyur and can be reached via Adivaram, Keerambur, Sengattupatti, Moolakadu, Manalodai, Thonur, Chinna Illupur, Periya Illupur and Vanadu Pudur. “It will also be helpful if steps were taken to build steps for a distance of about 600 metres of rugged terrain that leads to the falls,” Mr. Natesan said.

Verdant places such as Mangalam Falls and Koraiyar Falls in Pachamalai hills remain largely unexplored due to poor accessibility, he said. “When in full flow, the falls are as good as Courtallam. A spell of good rain in the hill ranges can bring water to these falls for a few months,” Mr. Natesan said.

Pachaimalai is situated in the Eastern Ghats with dry evergreen and dry deciduous forests located on the north-western border of Tiruchi district. The Forest Department has created an eco-tourism facility at Top Sengattupatti offering accommodation and guided trekking.