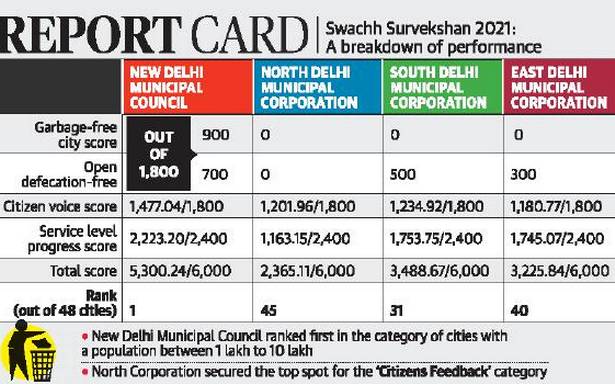 Despite various initiatives, this comes as a blow, especially with elections nearing

Two of Delhi’s three municipal corporations finished in the bottom 10 among 48 cities of the country in the Swachh Survekshan 2021 — the Central Government’s annual cleanliness survey. The survey results were announced on Saturday.

According to the survey, in which the three civic bodies have been ranked in the category of cities with a population of over 10 lakh, the East Delhi Municipal Corporation (EDMC) was ranked at 40 — a marginal improvement from the 2020 rankings when the civic body was ranked at 46.

With the civic body polls nearing, the rankings come as a blow for Delhi’s municipal corporations despite implementing various initiatives — in areas of waste collection, segregation and installing Fixed Compactor Transfer Systems (FCTS) for waste processing — to improve their rankings.

East body Mayor Shyam Sunder Aggarwal said that he was “happy with the marginal improvement in rankings”, and that the civic body “is working to improve its rankings for next year’s cleanliness survey”.

“The Corporation is focusing on all aspects of the survey to encourage largescale civil participation, ensure sustainability of initiatives towards waste-free and open defecation-free cities and provide reliable results, which will be validated by third-party certification. The existing systems will be institutionalised through online portals and at the same time, various parts of the society will be sensitised and encouraged to work together to make their cities beautiful and liveable,” said, SDMC spokesperson Sanjay Sahai.

The New Delhi Municipal Council ranked first in the category of cities with a population between 1 lakh to 10 lakh. The rankings for the annual cleanliness survey was based on parameters that include citizens’ feedback and engagement, service level progress — based on data provided by urban local bodies — and certification based on ratings for open defecation-free certification, garbage-free cities and water ratings.

The North Corporation secured the top spot for the ‘Citizens Feedback’ category, while the South and East civic bodies secured ODF certifications.

The survey was launched in 2016 with 73 cities being covered. A total of 4,320 cities were covered for this year’s survey.