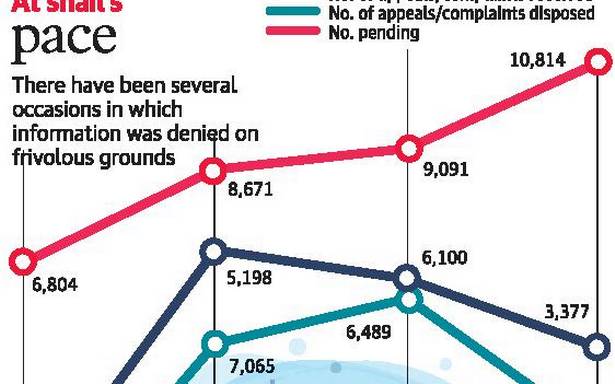 The Telangana State Information Commission is swamped with appeals and is facing a case of heavy backlog as there are over 10,000 appeals from complainants which await a final order.

But the saga of backlog is not new, and begins with the first year of the TSIC’s constitution.

As per the data TSIC furnished to activist S Q Masood, it was in 2017, three months into its formation, that the information panel received as many as 1,829 appeals out of which only 712 were disposed, and 6,804, which includes numbers from previous years, were pending.

Further, TSIC has not released its annual report which is mandated by Section 25 (1) of the Right to Information Act, 2005. This document is intended to monitor the implementation of the act by various departments.

It also gives crucial insight into how departments handle information requests as the number of cases rejected under subsections (a) to (j) of Section 8 of the RTI Act, 2005 is also provided.

In connection with the annual report, the TSIC informed Masood that annual reports which were prepared for the years 2017, 2018 and 2019 were submitted to the State government for ‘further action’ only in 2020.

The annual report for 2020 is ‘under preparation’.

Speaking to The Hindu Mr Masood, who is also an RTI activist, said that releasing annual reports in paramount as it gives a clear picture of the implementation of the RTI Act, 2005.

The Commission has penalised the authorities twice under Section 20 (2) of the Act, which deals with a failure to provide information within the specified period of time, or ‘malafidely denied’ the request, or has provided incorrect or incomplete information.

Speaking to The Hindu, Mr Masood, who is an RTI activist, said, “The reports not being made public casts a shadow of doubt on the seriousness of various departments in connection with supplying information to the public, and information is denied on several occasions.

The TSIC’s task is to monitor the implementation of the act. Secondly, there have been several occasions in which information was denied on frivolous grounds. Departments should be penalised for this.”