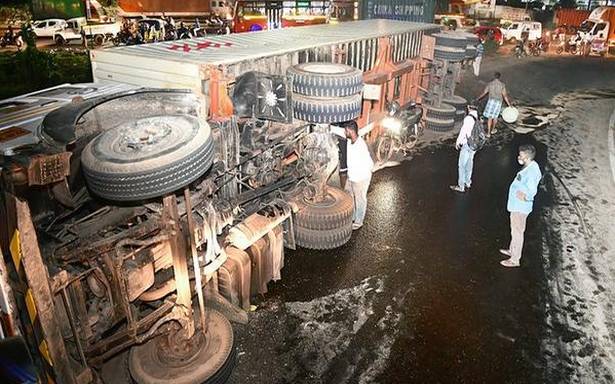 Traffic disrupted for over an hour; nobody hurt in the incident

Traffic flow on the ramp leading to the Chennai bypass at Maduravoyal remained disrupted for over an hour on Thursday evening after a trailer truck carrying a container turned turtle.

Sources in the Maduravoyal police said the incident happened around 6.30 p.m. when the vehicle, proceeding from the Ambattur side, climbed onto the elevated bypass. Nobody was hurt in the incident.

On way to the port

Engineers of the National Highways Authority of India (NHAI) said the movement of vehicles on the bypass was not affected due to the accident. The container was apparently carrying plastic goods and was proceeding to the Chennai port. When the driver was questioned, it was said the link between the pulling vehicle and the trailer was not fastened properly.

Incidents of container-carrying trailer trucks turning turtle are common on both the Chennai bypass and the four roads that form the Ennore-Manali Road Improvement Project in north Chennai.