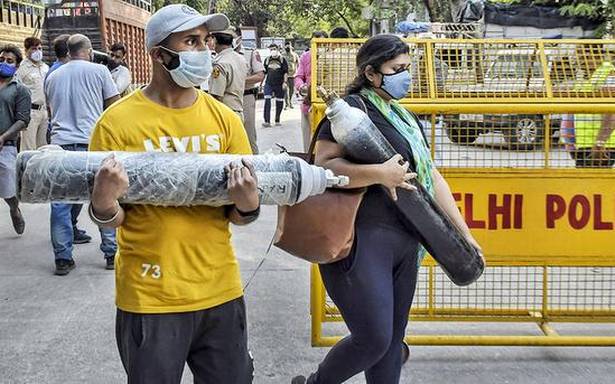 At least half a dozen hospitals ran out of oxygen in Delhi even as others struggled with depleting supply across the National Capital Region (NCR) on Thursday.

Chief Minister Arvind Kejriwal called on his counterparts in other States for a united front against the pandemic and pledged to share resources at every possible opportunity to do so.

Mr. Kejriwal’s deputy and nodal Minister for COVID management in the city Manish Sisodia asked the Centre to intervene and deploy paramilitary personnel at borders if need be to ensure that the Capital gets its quota of oxygen from Haryana and Uttar Pradesh, accusing their governments of interfering in supply.

He wrote a letter to Union Health Minister Harsh Vardhan stating that six private hospitals had exhausted their stock of oxygen, urging him to intervene to save the lives of people of Delhi and make sure that the city gets its quota of oxygen from other States.

Fortis Hospital in Haryana’s Gurugram, in a series of distress messages on Thursday evening, said it was left with only 45 minutes of oxygen supply. In Delhi, two IAS officers were appointed to ensure smooth procurement of oxygen tankers from neighbouring States and the police tasked with facilitating movement to medical establishments. Around 1 p.m., Rathi Hospital in Delhi, which has 78 COVID-19 patients, said it had oxygen only for half an hour. Shanti Mukund Hospital pasted a poster on its gate that it is stopping admissions. Another private hospital said around 5 p.m. that it had oxygen only for 90 minutes and had 233 COVID patients.

According to Delhi government estimates, Mr. Kejriwal said, the city required a daily supply of 700 tonnes of oxygen and the Centre had on Wednesday decided to increase the initial quota of 378 tonnes to 480 tonnes.

In his letter to Dr. Vardhan, Mr. Sisodia stated that only one of the seven major government hospitals under the Delhi government had oxygen supply for 24 hours while six of the 15 major private hospitals in the city had exhausted theirs. Others were struggling with little to dangerously low supply of oxygen. The Delhi government, he said, was also mulling airlifting oxygen from Odisha.

The pandemic, Mr. Kejriwal said, was a collective crisis and everyone needed to come together to confront and defeat it. It was time, he said, that governments rose above State divisions and became “Indians”.