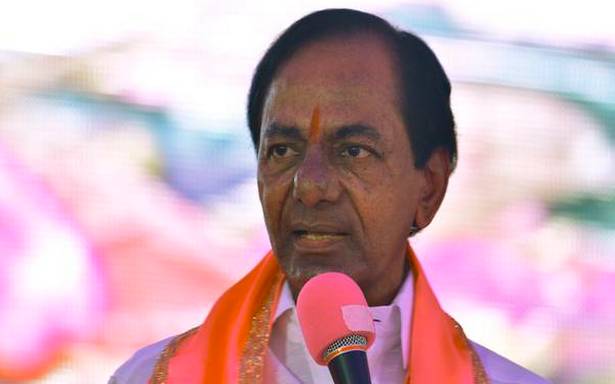 It is ad hoc and reactive to political situations, says BJP’s Muralidhar Rao

The Telangana government’s income support scheme for farmers, the Rythu Bandhu scheme, received universal acclaim and was even replicated at the Central level, but its scheme for Scheduled Caste communities, the Dalita Bandhu scheme, has led to criticism from all quarters of the political spectrum, not least because the pilot project has been launched in a bypoll bound Assembly seat.

The Huzurabad Assembly seat was vacated after former Health Minister in the Telangana Rashtra Samithi (TRS)-led government, Eatala Rajendra, quit and joined the Bharatiya Janata Party (BJP) a couple of months ago. Belonging to the Dalit community, his exit created some discomfort in the TRS as to its appeal to Dalit communities. Following Mr. Rajendra’s exit, Chief Minister K. Chandrashekhara Rao wasted no time in announcing the Dalita Bandhu scheme, touted as one of the biggest direct cash benefit schemes in the country, the pilot project for which would be launched in the Huzurabad Assembly seat, bypolls for which are due.

The scheme provides finance of up to ₹10 lakh to Dalit families under 30 different projects without bank linkages. In Huzurabad itself, the pilot project envisages scrutiny of 20,929 families for benefits under the scheme. Later, on August 8, the scheme was extended to Mr. Rao’s adoptive village of Vasalamari in Yadadri district, and a sum of ₹7.60 crores was set aside for it. The overall State-wide budget for the scheme is pegged at ₹80,000-₹1,00,000 crore.

Former national general secretary in the BJP, P. Muralidhar Rao, says that the scheme is being criticised by his party for the ad hoc way in which it is being implemented. “The Rytha Bandhu scheme had a policy architecture that was robust. This scheme is reactive to political situations and Dalit communities deserve better than to be made a beneficiary in a scheme that has been launched and is being taken forward in such an ad hoc manner,” he said.

Madhu Goud Yaskhi, campaign committee chairman for the Telangana Congress said that his party, too, had a problem with the manner in which the scheme had been brought in. “If you go by past promises made by the TRS government, Dalit communities are owed ₹1 crore individually as the government had promised three acres of land, scholarships for Dalit students and other benefits before every poll. We demand that the government fulfil all promises made to the Dalit community,” he said.

The Election Commission is yet to notify polls in Huzurabad, but going by the way the TRS has taken on the exit of Mr. Rajendra, it will be a tough contest, and hanging in balance would be the support of 18% of Dalit voters in the State.