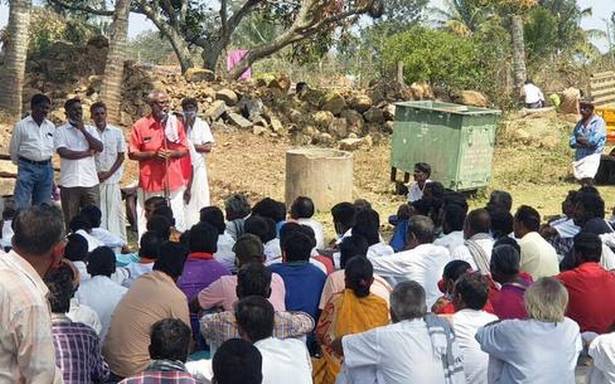 At a meeting on Thursday, tribal communities and social welfare organisations discussed the potential loss of rights of forest dwellers, if the reserve came up

Tribal people and other forest dwellers living in Bargur hills in Anthiyur Union have urged the State government to ensure their traditional rights are protected, before the creation of a new tiger reserve in the Erode Forest Division.

The Tamil Nadu Forest Department is in the process of drafting a proposal to create a new tiger reserve in the division that is spread over 82,144 hectares and is home to 15-20 tigers, elephants, leopards and other wild animals. The proposal has created panic among the people in the hill area who depend on the forests for their livelihoods: they claim that their traditional rights will be curtailed.

On Thursday, over 400 people, including representatives of political parties, social welfare organisations and tribal associations, gathered at Thamaraikarai to chart out the next course of action. Addressing the gathering, many speakers said that after the declaration of the tiger reserve, people would lose their rights to offer prayers in temples inside the forest area, they would be unable to collect minor forest produce and also would be unable take their cattle for grazing in the forest areas. They said that people would need to pay a user fee to access forest roads and may be forced to vacate their houses if they came under the core tiger reserve.

“The Forest Rights Act (FRA), 2006, ensures all our rights, but the act has not been implemented in the State in the last 15 years”, the speakers said. Hence, the meeting aimed to seek the attention of the State government towards this issue, they said.

V.P. Gunasekaran, State Committee Member, Tamil Nadu Tribal People Association, said that Section 38 V (4) (i) (ii) in the Wild Life (Protection) Amendment Act, 2006, the State Government was to notify an area as a tiger reserve only after obtaining the consent of the Scheduled Tribes and other forest dwellers in the area and in consultation with an ecological and social scientist familiar with the area. “But without holding any consultations with the people or ensuring their rights given in the FRA, steps were taken to create a new tiger reserve, which is against the law’, he said.