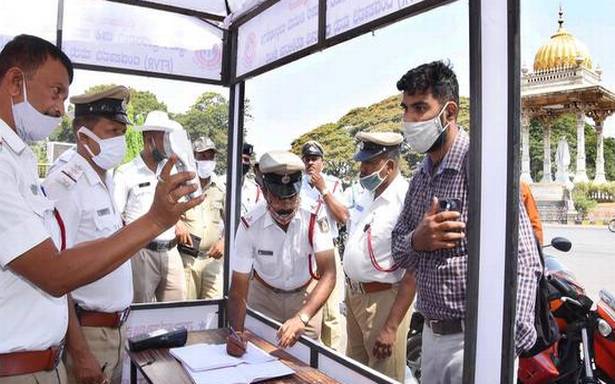 In its resolve to make traffic policing people friendly and transparent, the Mysuru City Police have introduced new guidelines for vehicle checking and imposing fines for traffic violations. The new rules that are a result of a recent backlash against the traffic police following the death of a biker, have come into effect from Thursday.

The “new improved traffic management protocols” had been introduced on an experimental basis and can be modified/improved further based on the public feedback.

However, the traffic policemen, as per the new guidelines, are not supposed to stop moving vehicles just for checking documents. However, in case the motorist was found committing traffic violation on the move (visible violations), the police are empowered to penalise violators at any time of the day.

As a trial run, the police have launched “voluntary checking counters” at 10 places across the city where motorists can verify traffic violation cases booked under their vehicle registration number and pay unpaid fines to the policemen manning the counter. The motorists can also get their documents checked from the police.

The policemen from five traffic police stations, including V.V. Puram, K.R., Devaraja, N.R. and Siddharathanagar, are carrying out this drive.

Commissioner of Police Chandragupta, who briefed the policemen about the guidelines at the parade grounds on Wednesday, said the policemen in charge of the counters had been told to provide proper parking facility and necessary information, including details of unpaid fines. No motorist would be stopped by the policemen at the counter and the motorist can visit the counter on his/her own in a step to bring police closer to the public.

In the wake of complaints of congestion at key traffic junctions, an officer of the rank of ASI and above from the respective traffic police station would adopt a junction or a circle and take the responsibility of improving the traffic management system. The officer, after adopting the circle, is supposed to be visit the circle for one hour daily and ensure hassle-free traffic movement besides making necessary arrangements coordinating with the policemen for the smooth flow of traffic.

The responsibility of the adopted circle lies with the officer and the best managed circle would get a prize at the end of each month.

The Commissioner also told the officers to ensure smooth flow of traffic during peak hours and not to resort to vehicle checking in those hours besides taking care of motorists’ safety during enforcement of rules.

The policemen carrying out traffic enforcement cannot stop a motorist abruptly, appearing suddenly on the road. They had been strictly told not to use barricades or sticks to stop moving vehicles and end the practice of taking away keys for stopping motorists from evading checks. Use of foul language and speaking loudly with the public should be avoided as also getting into arguments with the public.