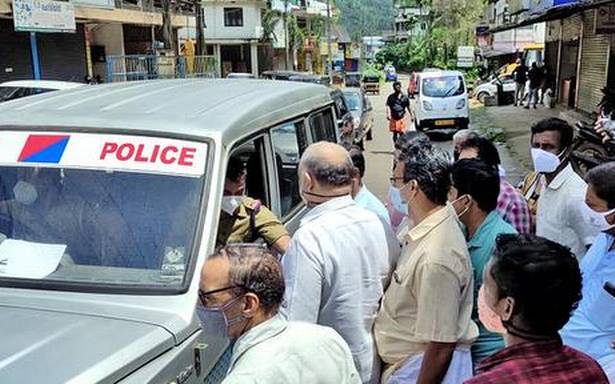 Despite stringent legal action by the police, more traders owing allegiance to the Kerala Vyapari Vyavasayi Ekopana Samiti (KVVES) are defying containment zone regulations by opening shops that fall under the non-essential category. In some of the rural areas, traders locked horns with the police on Thursday when they were asked to down the shutters in micro containment zones.

A section of traders from Koodaranhi, where many shops were opened on Thursday flouting regulations, said they had been going through an acute financial crisis for over 24 days. It was at a time when the majority of the traders tested negative for COVID-19 and cooperated with all the important regulations, they said.

Those who opened shops also staged a protest in the Koodaranhi market against the local panchayat authorities.

According to them, the authorities were trying to portray traders as those responsible for the rapid increase in COVID-19 cases.

Similarly, non-essential category of shops were opened in many rural areas like in Perambra, Kuttiyadi and Nadapuram. To prevent mass protests, the police remained silent in many locations.

However, cases were registered against violators under the Epidemic Diseases Act. Trade union leaders said they would fight the case.

In the wake of the rising protests, State functionaries of the KVVES said they would extend all moral and field support to traders who wanted to open their shops in containment zones. They reiterated that traders were not spearheading any protest to defy rules but trying to resume their business as usual for survival.