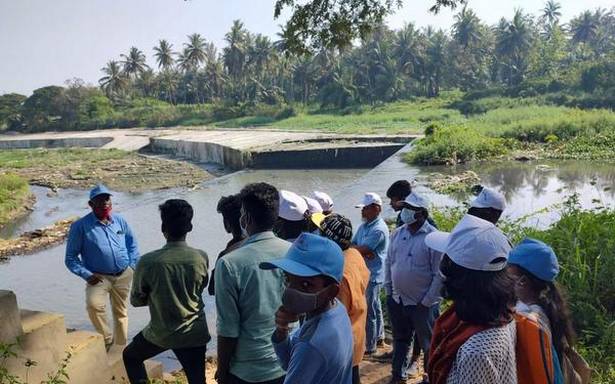 A total of 30 persons, including college students and nature enthusiasts, were part of a 40-km-long journey on Sunday that traced the course of River Noyyal from its pristine origins at the foothills of the Western Ghats to its polluted state as it reaches the city of Coimbatore.

Conducted by the Wildlife Institute of India (WII) in collaboration with Coimbatore-based Centre for Urban Biodiversity Conservation and Education (CUBE), the ‘River Walk’ was organised as part of the nationwide ‘Nadi Utsav’ (Festival of Rivers) initiated by the Ministry of Jal Shakti.

According to Historian C.R. Elangovan, who guided the participants in the journey from Siruvani Hills to Singanallur Tank in Coimbatore, the participants were first made to witness the confluence of several streams at Kooduthurai near Madhvarayapuram to form Noyyal and how pure its water was, he said.

The next stop was at Perur Padithurai (ghat), where Mr. Elangovan said that he explained to the participants how River Noyyal accorded importance to Perur, which was a major temple town and a trade centre during the reign of the Cholas.

Upon reaching Nanjundapuram, the participants were made to notice the change in colour of the river as pollution became apparent, he said. By the time they reached Singanallur Tank, a part of the River Noyyal system, they were able to notice that the extent of pollution has increased, with a palpable change in odour and colour, Mr. Elangovan said. “Some of the students were initially playful when we began the trip, but they realised the seriousness of this issue by the end,” he said. The ‘River Walk’ was held from 8 a.m. to 3.30 p.m. on Sunday.

Soumya Dasgupta, project scientist at WII who was also a part of the ‘River Walk’, said on Monday that the purpose of organising the event was to raise awareness on the importance of conservation of rivers. The WII is currently working on assessment of six rivers in India namely Cauvery, Mahanadi, Narmada, Godavari, Periyar and Barak under the aegis of the National River Conservation Directorate of the Ministry of Jal Shakti, he said. Under this project, biodiversity and toxicology studies of these rivers will be carried out, according to Mr. Dasgupta.