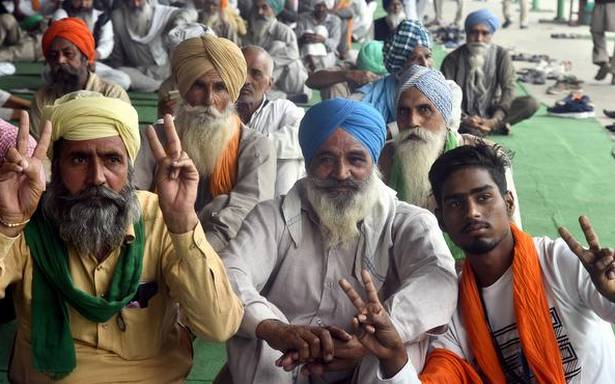 SKM calls farmers to gather at protest sites on November 26

“SKM appeals to farmers in various North Indian states to reach the different morcha sites on November 26, 2021, which marks the completion of a full one year of continuous peaceful protests at Delhi’s borders,” the Samyukt Kisan Morcha, an umbrella body of farmer unions, said in a statement. The SKM is meeting on November 21 to decide on the next course of action, including on the MSP issue and the proposed daily tractor march to Parliament during the upcoming Winter Session, SKM core committee member Darshan Pal said.

Mr. Khan and two others were granted bail on October 28. The detailed bail order was made available on November 20.

Rescue teams found eight bodies after 50 persons went missing after they were washed away in the gushing waters when the Annamayya dam breached near Rajampeta in Kadapa district on November 19. Most of the victims were passengers of two RTC buses caught in the floodwaters on the road down the reservoir zone. Unconfirmed reports said that another four bodies were found.

A blast took place on the railway tracks between Richughuta and Demu stations around 12.30 a.m. on November 20.

Employers can use this service to verify vaccination status of employees and resume the functions in offices and workplaces.

Nepal will not allow nationals from a third country to travel to India by rail via the recently launched Kurtha-Jayanagar railroad after Indian officials raised a red flag, citing security concerns, a media report said in Kathmandu.

Demonstrations against virus measures are also expected in other European countries including Switzerland, Croatia and Italy.

Nearly 85% of Australians aged 16 and above have been fully vaccinated against the coronavirus as of November 19.

The companies, including Alibaba Group and Tencent Holdings, failed to report 43 acquisitions that occurred up to eight years ago under rules on “operating concentration,” according to the State Administration for Market Regulation. Each violation carried a penalty of 5,00,000 yuan ($80,000).

It was not just the confidence of RBL Bank customers that certainly took a hit following the breach of the ‘classified’ data of credit cardholders, but the data of State Bank of India and Axis Bank is also at risk.

Peng Shuai has not been seen or heard in public since she said on Chinese social media that former vice-premier Zhang Gaoli coerced her into sex, and they later had an on-off consensual relationship.

She lost to Japanese top seed Akane Yamaguchi 13-21 9-21 in a one-sided duel that lasted just 32 minutes.

Captain Rohit Sharma will not waver from his ruthless approach but might try out a few of his reserve players as India aim for a clean sweep against New Zealand in the third and final T20 International, in Kolkata on November 21.