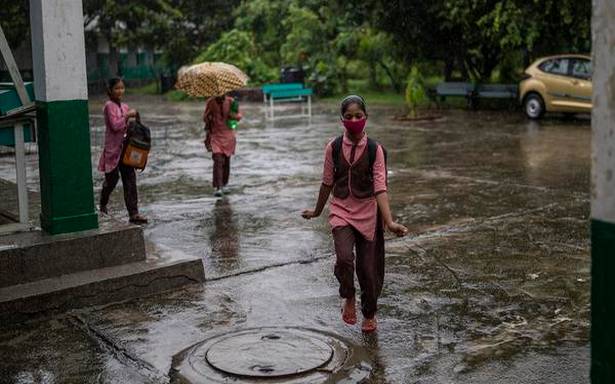 The Indian SARS-CoV-2 Genomics Consortium said Delta continues to be the dominant lineage in India and globally.

Schools, which remained shut for months owing to the COVID-19 pandemic, reopened for classes 9 to 12 across Tamil Nadu, Telangana, and Delhi.

The case against the 10 people was filed for allegedly making hate speeches.

The victim had filed a rape case against Bahujan Samaj Party MP from U.P. Atul Rai in 2019, but alleged that the police were supporting the accused.

Country likely to receive above normal rainfall in September: IMD

The country received 24% less rainfall than normal in August, belying the India Meteorological Department’s (IMD) predictions for the month, but rainfall is expected to be above normal in September.

The Congress leader slammed the government over the rising price of domestic cooking gas, diesel and petrol, and alleged that an amount of ₹23 lakh crore has been earned by increasing prices of these commodities in the last seven years.

A strong resolution was passed on the situation on Afghanistan demanding that Afghan territory not be used to train terrorists.

News Analysis | What did America achieve in Afghanistan?

For the first time since October 2001, there are no American troops in Afghanistan.

“The president has promulgated emergency regulations under the Public Security Ordinance on the supply of essential goods,” presidential spokesman Kingsley Ratnayake told reporters.

Eng vs Ind, 4th Test | All eyes on team management’s stand on Rahane and Ashwin as India eye improved show

The Oval track has traditionally helped spinners and therefore Ashwin might just bring in his 400 plus wicket experience to trouble the English batters who have been wary of him in the past.

He was disqualified as he didn’t comply with World Para Swimming’s rule number 11.4.1, which states that "at any time prior to the first breaststroke kick after the start and after each turn, a single butterfly kick is permitted.