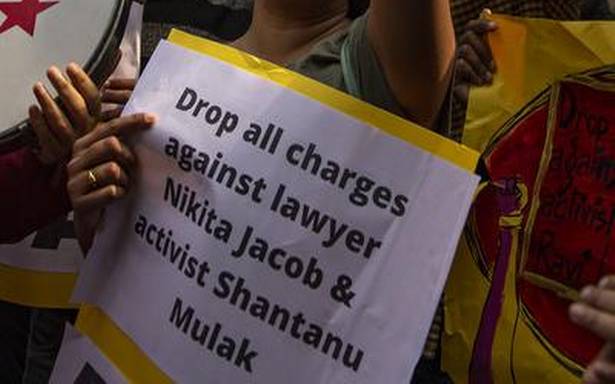 The Bombay High Court will pronounce on Wednesday the order on a plea filed by advocate Nikita Jacob seeking transit anticipatory bail in the toolkit case, while a single bench of justice Vibha Kankanwadi of the Aurangabad bench of the court granted 10 days of the same bail to Shantanu Muluk in connection with the same case.

Counsel for the Delhi Police, Hiten Venegavkar, raised questions about the maintainability of the application. He said there was no provision for transit bail under the Code of Criminal Procedure (CrPC). The offence was registered in Delhi. Therefore, no cause of action had arisen here.

The court, however, said, “cause of action arises for anticipatory bail but this is a transit bail application.”

Mr. Venegavkar pointed out that under Section 438 (direction for grant of bail to person apprehending arrest) of CrPC, the court did not have the power for cases outside the jurisdiction of court to grant anticipatory bail.

Senior advocate Mihir Desai, for Ms Jacob, urged the court to look at the limited purpose of granting transit anticipatory bail as the NBW was issued by the Tis Hazari court. He said they (Delhi Police) have raided Ms. Jacob’s house and seized her electronic devices.

He contended that she was an advocate of this court and an environmental enthusiast. According to them, she was preparing the toolkit but then it did not contain any violent acts or anything pertaining to taking over the Red Fort, he stated. He argued that the entire case was formed because of a tweet from activist Greta Thunberg.

The court said the merits of the case would be considered by the court concerned.

The bench exclaimed, “Should we grant transit when a warrant has been issued?”

Mr. Desai replied, “They do not need a warrant to arrest. This a cognizable, non-bailable offence.”

He informed the court that Mr. Muluk had been granted transit anticipatory bail by the Aurangabad bench. The court said it would pass an order tomorrow.

The toolkit has certain documents and enlists ways to create a “twitter storm” in support of the protesting farmers.