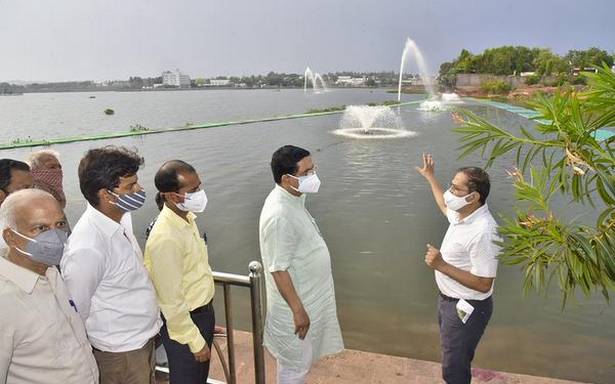 There is an idea to transform Unkal Lake Park as a tourist place, says Union Minister Pralhad Joshi

The Tolanakere (tank) development works taken up under the Smart City Scheme will be completed and dedicated to the public in the next four months, while the development work on Unkal Lake is expected to take 18 months.

Speaking to presspersons after visiting both the water bodies on Monday, Union Minister for Parliamentary Affairs, Coal and Mines Pralhad Joshi said that as per the directions given during Smart City Scheme review meetings, sewage entering the water bodies is being plugged.

“A sewage treatment plant has been set up near Tolanakere and every day, 10 lakh litres of treated water is being let into the lake. Water will be cleaned completely in the coming days. Although the lake was developed earlier, lack of maintenance has resulted in damage to several amenities. But this time, a five-year maintenance clause has been included in the contract,” he said.

Mr. Joshi said that a Smart City committee would be set up for maintenance of parks and recreation facilities in the twin cities. The revenue generated from entry fee and other activities would be utilised for maintenance of the parks and the lake-parks, he said. He was accompanied by MLA Arvind Bellad and others.

Earlier, he visited Unkal Lake Park and sought details from the officials on development work which has been taken up at a total cost of ₹42 crore. He said that the idea was to transform Unkal Lake Park into a tourist destination. “For the purpose, the cleaning of the lake is being taken up. Beautification works will follow and also a children’s park will come up,” he said.

Managing Director of Hubballi-Dharwad Smart City Scheme Limited (HDSCL) Shakeel Ahmed said that in the first phase, works on cleaning and improving the quality of the lake water had been taken up. “Sewage is entering the lake from four sides and all these points are being plugged in the first place. To improve the quality of the water, aerators and raptors have been installed. The water quality will improve slowly,” he said.

He said that in the second phase, the plan was to develop the lake park into a Bio Diversity Park. “In the second phase, the whole lake, which is spread over 270 acres of land, will be fenced. We will have a five-kilometre-long fencing. There will be a walking track, proper illumination apart from other amenities,” he said.

Mr. Shakeel Ahmed said that on the Western side of the lake, nearly 250 species of birds inhabited and they wanted to convert that area into a sort of bird sanctuary. “We plan to have an arrangement for watching birds and there will also be a view point,” he said.