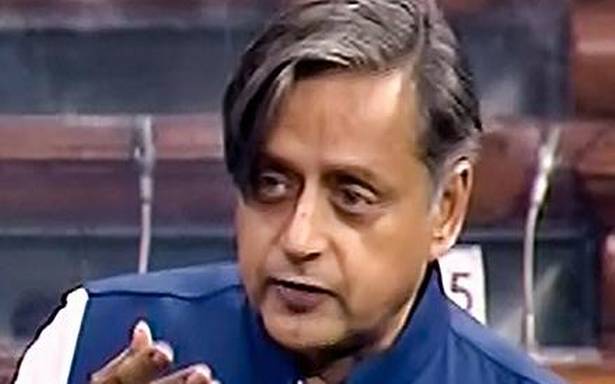 Sudhakaran says all Cong. members have to be subservient to party line

Mr. Tharoor’s “tacit approval” of the government’s K-Rail (SilverLine) project had arguably given ammunition to the ruling front to disparage the United Democratic Front’s (UDF) “studied” opposition to the flagship semi-high-speed railway project.

Consequently, the KPCC resolved to ask Mr. Tharoor why he declined to sign a petition by the UDF MPs seeking a Central direction to the State to stop forging ahead with the scheme, including land acquisition and demarcation of the railway line. It was unclear whether Mr. Tharoor has explained his position.

In Kannur, KPCC president K. Sudhakaran seemed to reach the end of his tether when beset by questions about Mr. Tharoor’s allegedly stiff-necked recalcitrance to toe the party line on SilverLine.

It seemed not to help that Mr. Tharoor is reckoned to be part of the “rebel” group of 23 leaders (G-23) in the All India Congress Committee (AICC). The collective has repeatedly clamoured for organisational elections, a euphemism for opposition to the practice of nomination to top party positions. Earlier, Mr. Tharoor had also come under criticism for “staying away” from party programmes.

What seemed to have irked the KPCC most was Mr. Tharoor’s perceived endorsement of K-Rail and Chief Minister Pinarayi Vijayan’s development initiatives. His controversial tweet had come on the day the UDF was poised to launch a Statewide agitation against the K-Rail. It seemed a slap on the face of the KPCC leadership.

The tweet drew flak from top Congress leaders. Former KPCC president Mullappally Ramachandran said Mr. Tharoor had made a habit of putting the party in a spot. Mr. Ramachandran had demanded the high command to discipline Mr. Tharoor if he did not fall in line with the party. Other Congress leaders also made their displeasure evident. Some said the tweet had undermined UDF’s studied position on K-Rail and advantaged Mr. Vijayan.

Mr. Tharoor, on his part, appeared to maintain that he had not endorsed K-Rail. He needed time to take a studied position on the ambitious project.