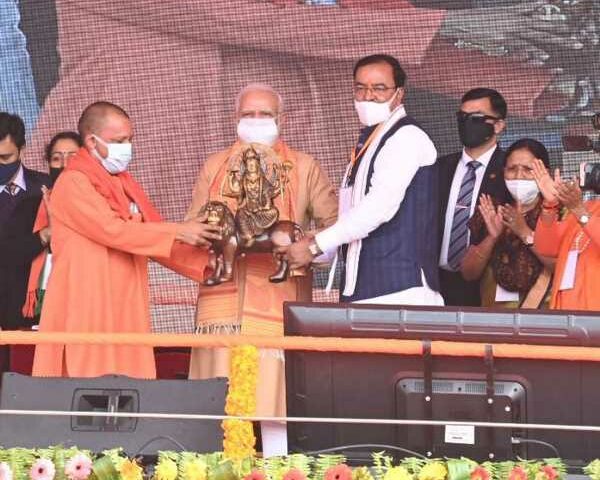 ‘The people of Uttar Pradesh have already made up their mind to puncture the Samajwadi Party’s cycle, kick away the Bahujan Samaj Party’s elephant, and remove shadows of the already-vanished hand of the Congress.’

You claim the BJP will retain power in UP with the same majority it had in 2017. Why do you think the state will vote for the BJP?

The electoral results in the past clearly show how our party emerges victorious, notwithstanding all Opposition parties contesting together against us — be it in 2014, 2017 or 2019.

Our double-engine government has not only fulfilled all the promises that it made in its manifesto but has also made Uttar Pradesh an ‘Uttam Pradesh’.

Unlike previous governments, the BJP is dedicated to the welfare of the masses.

One can assume it by seeing all the development projects that we have rolled down for the people.

These projects will not only help us retain the previous election’s margin but also with an increased share.

The people of Uttar Pradesh have already made up their mind to puncture the Samajwadi Party’s cycle, kick away the Bahujan Samaj Party’s elephant, and remove shadows of the already-vanished hand of the Congress.

But most of the projects you talk about have either not started or are in initial phases?

Amid the pandemic, we were able to work for just 3.5 years of this term.

However, no one can deny that we have done more development work in these 3.5 years than what the SP and the BSP together did in their regimes.

Why does the Yogi-led government always showcase the development work of the central government, and not of the state government?

We have 64 MPs who hail from Uttar Pradesh. One needs to understand that whatever work the ‘central government’ is doing is our own achievement.

UP’s unemployment rate today is 4-5% as opposed to over 17% in 2016. However, the Opposition alleges that it is nothing but fudging of government data…

It’s not us, but the Opposition that always tries to present distorted facts and figures to people.

Sadly, they have nothing positive to offer.

The BJP-led UP government has given 450,000 jobs to the youth in the past four-and-a-half years, and no one can question that.

As promised in our manifesto, we have given ‘Rojgar Ke Avsar’ to over 7 million people.

SP chief Akhilesh Yadav says the BJP does not talk about development issues because it has nothing to show for the past 4.5 years.

Earlier, I used to consider the Congress a lying machine.

But Akhilesh Yadav is the leader of liars.

People have already smashed them in 2017.

The 2014 Lok Sabha elections were conducted during his regime. We won 73 seats then.

In 2019, his grand alliance of the SP-BSP-RLD was also not able to dent the BJP in UP.

The results of the 2022 election will shock him to the core.

Unemployment and privatisation are the two key issues in UP. Student and youth organisations have already launched a statewide movement demanding the Yogi Adityanath-led government fill up the state’s 2.5 million vacant jobs. Don’t you think these issues could hurt you?

We cannot commit to any deadline for these recruitments.

Our government aims to achieve these targets as soon as possible.

Not only government jobs, but we are also generating employment in the private sector.

Farmers have called off their protest at the Delhi-UP border in Ghazipur. But they were there for a year. How do you see the overall impact?

Though those laws were for the benefit of farmers, our PM has apologised to farmers and repealed these farm laws.

We have had farmers’ support and we will continue to have it.

The NITI Aayog’s Multidimensional Poverty Index shows that UP’s 37.79 per cent population is poor — making the state the third-poorest, after Bihar and Jharkhand. What is the reason for this?

The 15-year rule of the BSP and the SP has made this state impoverished.

The report is a reflection of the previous government’s work.

UP is suffering because of their rule.

In the past five years, we have improved our rankings on many development indices.

OBCs claim that their representation in government jobs has decreased in recent years. What do you have to say about it?

If one looks at the past, no community had ever received proper representation.

We have given representation to every community at both central and state levels.

I am deputy chief minister in UP (Maurya belong to an OBC community).

Had Akhilesh or Mayawati made any Sakya, Kushwaha, Saini, Patel, Nishad, Lodhi, etc, even a deputy CM? These are communities they are eyeing.

They will not achieve anything from these moves.

After BJP leaders made claims about constructing aa Krishna temple in Mathura, the Opposition says that it is your fear of losing the UP election that is prompting this.

The Opposition has no real agenda. Their only concern is why the government compensations and subsidies are being transferred directly to beneficiary accounts.

Why people are getting benefits of the Ayushman Bharat Yojana, Har Ghar Sauchalay, pakka ghar schemes, electrification, and ration bhandar during Covid.

Why are their agents not getting anything?

Akhilesh Yadav said the BJP is using fake photographs of dams, roads and airports to beguile the voters as it has not done any work in UP.

This is not an issue. Our Jewar airport in Gautam Buddh Nagar is world-class. It would be incorrect to link it with the elections.

The Opposition should feel ashamed to raise such issues.

Recently, alleged corruption in the Ayodhya land purchase and UP TET (teacher eligibility test) paper leak raised questions about your government. Why do you think that the paper leak nexus is able to thrive despite your government’s no-corruption policy?

The process of recruitment is transparent. It doesn’t matter who they are, proper investigation will be conducted against them.

I am sure that those who are involved in such incidents are SP, BSP, and Congress agents.

But these corruption cases have happened during your regime. Isn’t the BJP accountable for these alleged cases of corruption?

Our work is to conduct an investigation.

We have even sent many of them to jails.