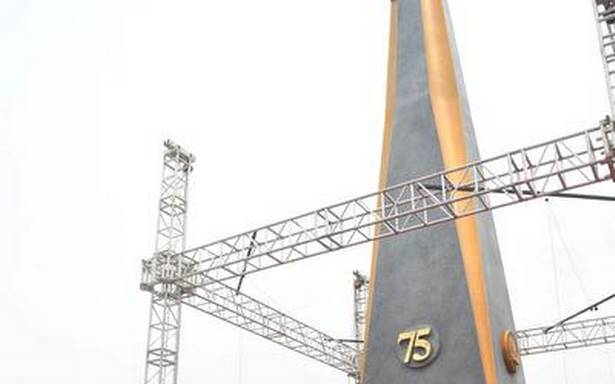 Chief Minister also announced an increase in the pension for freedom fighters from ₹17,000 to ₹18,000

The Tamil Nadu government will compile and publish a document detailing the contribution made by Tamil Nadu to the Indian Freedom struggle, Chief Minister M.K. Stalin said. The document will be published in Tamil and English, he added.

Delivering the Independence Day address at Fort St. George after inspecting the parade and hoisting the National Flag, Mr. Stalin said, while it was already 75 years since India won Independence, the fight for freedom had begun 150 years before and the land of Tamils played a major part in it.

Following the celebrations at Fort St. George, Mr. Stalin inaugurated the pillar at at the junction of Sivananda Salai and Kamarajar Salai. Listing out many of the freedom fighters from Tamil Nadu, Mr. Stalin said that the pillar was built with the breath of these freedom fighters from Tamil Nadu. The pillar was built to commemorate the 75th Independence Day. The Chief Minister announced that the State government will celebrate the 150th birth anniversary of freedom fighter V.O. Chidambaram in a grand manner.

The Chief Minister said the Gandhi Memorial Museum in Madurai would be renovated at a cost of ₹6 crores to attract the public and the younger generation. “Let us all take an oath today that the youth are imbibed with the Gandhian spirit to tackle the challenges posed by issues of caste, religion, creed in the country,” Mr. Stalin said.

Mr. Stalin also recalled the role played by former Chief Minister and his father late M. Karunanidhi in enabling Chief Ministers to hoist the national flag on Independence Day, by providing such a suggestion to then Prime Minister Indira Gandhi in 1974.

He also spoke about some of the schemes launched by his government in the last 100 days since coming to power.