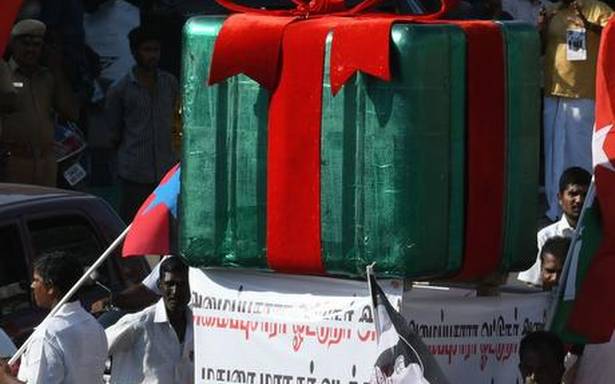 Like Mr. Rajavarman, who was denied a party ticket from the Sattur Assembly seat, Mr. Thangaraj, who had been promised an opportunity to contest from the Virudhunagar Assembly constituency, was not given a party ticket.

Mr. Thangaraj claimed he had spent huge amounts of money for welfare assistance during the COVID-19 pandemic as per the advice of Minister for Dairy Development, K.T. Rajenthra Bhalaji. He is likely to be declared as the AMMK party’s candidate from Virudhunagar Assembly seat that has been given to the Bharatiya Janata Party by the AIADMK.

Meanwhile, Mr. Balagangadaran, who became the AIADMK MLA from Sivakasi Assembly constituency in 1991, too joined the AMMK in the presence of its general secretary, T.T.V. Dhinakaran on Thursday.

“Many of the party union and town secretaries as well as the MLA, former MLA and former MP complained about the deteriorating party functioning in the district for nearly a year. No action was taken against Mr. Bhalaji. I don’t want to be in a party where my self-respect is challenged,” he said.

Stating that the party’s weakness should not go in favour of the DMK, Mr. Balagangadaran said that he had joined a party with better leadership.