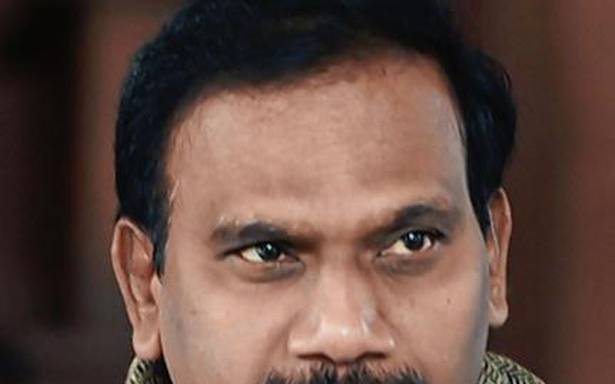 The DMK leader had caused a furore by his recent remarks when he likened Mr. Palaniswami’s emergence as a leader to a “premature birth”

DMK leader and Nilgiris Lok Sabha MP, A. Raja, on Monday apologised for his recent remarks against Chief Minister Edappadi K. Palaniswami, but reiterated that his words were “taken out of context.”

Mr. Raja held a press meet in Udhagamandalam responding to the furore sparked by his remarks during electioneering, when he likened Mr. Palaniswami’s emergence as a leader to a “premature birth,” compared to DMK president M. K. Stalin, who had risen through the party ranks in a “proper way.”

In his statement to the press, Mr. Raja said that his remarks, which were an analogy to make a broader point about the emergence of Mr. Stalin and Mr. Palaniswami as political leaders, were taken out of context. “…a few of my remarks were taken and are being misinterpreted for political reasons,” he said. He, however, added that he was pained to hear that Mr. Palaniswami had been hurt by his remarks, and said that he regretted any offence caused to the Chief Minister or his mother. “I will go one step further and say that if Mr. Palaniswami was hurt personally by my remarks, I offer my heartfelt apologies,” he said.

Mr. Raja reiterated to the AIADMK cadres and the general public that his remarks were not a personal attack on the Chief Minister.

Quoting Justice Saini’s summary on the 2G case, in which the judge said that the charges against him were based on “misreading, selective reading, non-reading and out-of-context reading” of files, the Nilgiris MP said that if the full 40-minute long speech of his was heard in its entirety, people would come to the same conclusion about his remarks.