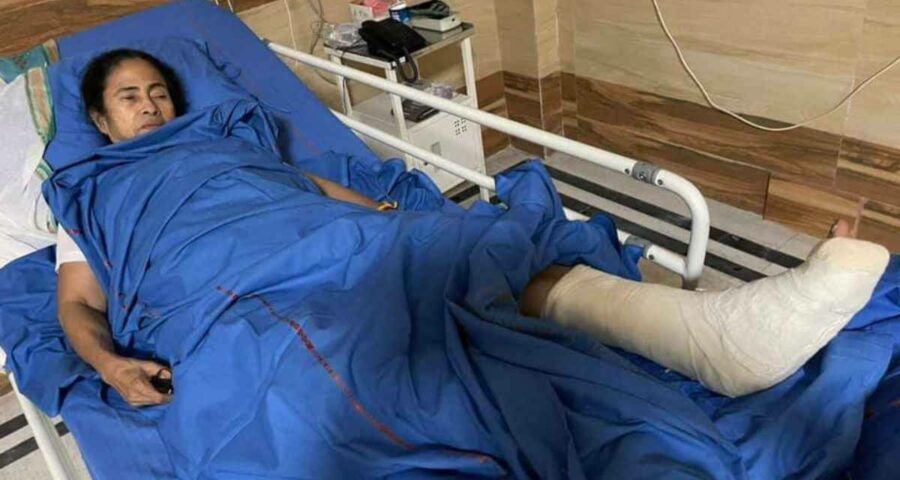 On Thursday, Banerjee released a video, asking her supporters to show restraint and promising to return to campaigning soon. Also, a TMC delegation of Derek O'Brian, Chandrima Bhattacharya and Partha Chatterjee submitted a memorandum to the Election Commission in Kolkata. Alleging a BJP hand in what he called an “attack” on Chief Minister Mamata Banerjee in Nandigram, TMC secretary general Partha Chatterjee on Thursday held the Election Commission responsible for the lapse in security.

After a core committee meeting of the party, Chatterjee said what happened Wednesday “seems like a planned attack”. He added: “Our election core committee condemns the incident and from 3 to 5 pm tomorrow we will hold a massive black flag protest across the state”. He said the BJP had said after the March 10 rally that something would happen. “Now you know what was happened. We have our doubts. The Election Commission should find out what exactly was happened.”

Meanwhile, TMC workers have started protests at different places across the state from Wednesday itself demanding the arrest of the culprits.
On Wednesday, hours after filing her nomination at SDO office in Haldia, Banerjee returned back to Nandigram to start her campaign. But at Berulia bazar of Nandigram she was allegedly attacked by 4-5 people while she was returning after performing a puja, standing on the footrest of her vehicle. Soon after, the Chief Minister alleged a deep conspiracy behind the “attack”. After the incident, she was rushed to SSKM Hospital in Kolkata where doctors said has severe injury in her left ankle and foot which has a fracture.

On Thursday, Banerjee released a video, asking her supporters to show restraint and promising to return to campaigning soon. Also, a TMC delegation of Derek O’Brian, Chandrima Bhattacharya and Partha Chatterjee submitted a memorandum to the Election Commission in Kolkata.

The memorandum says a person “who is a Z plus protectee is threatened” at a time when the “Election Commission of India has taken over the law and order machinery in the state in the name of conducting elections, appropriated the whole governmental structure and summarily removed and replaced the Director General of Police without any consultation with state government, at the behest of the Bharatiya Janata Party”.

It claimed the “attack is a deep-rooted conspiracy to take the life of our Chairperson” and called for “an immediate investigation into the same”. The letter alleged, “It appears that there is a nexus between the complaints by BJP against the erstwhile DGP. The ECI unilaterally removing the DGP, the SP and the district police being absent at the time of the brazen attack on Mamata Banerjee.”

Meanwhile, a BJP delegation led by Sabyasachi Dutta and Sisir Bajoria also went to CEO office in Kolkata and asked for release of video clippings of the accident so that everybody knows what happened at the spot.

In the morning, BJP leaders Samik Bhattacharya and Tathagata Roy came to the SSKM to meet with Chief Minister but they were not permitted to go inside the cabin as Chief Minister is in isolation. They met with TMC leadership and later Bhattacharya said, “We pray for her speedy recovery.”