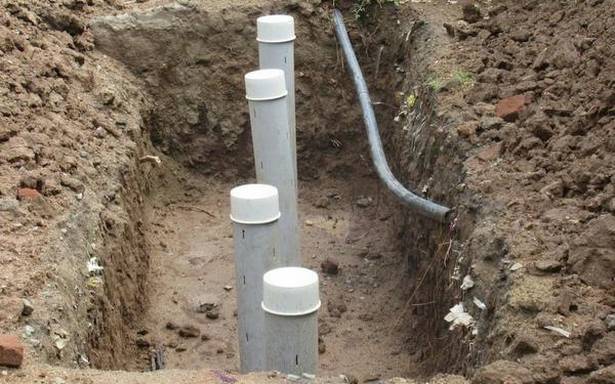 In an effort to prevent waterlogging in vulnerable spots and recharge groundwater, Tiruchi Corporation has launched a drive to establish roadside rainwater harvesting pits in different parts of the city.

Water logging during the rainy season has been a major issue in the city for several years. It often exposes the poor stormwater discharge whenever the city experiences rain. Several roads and streets are inundate with water by rain spanning just 30 minutes. If the rain is heavy, it invariably requires the intervention of Corporation workers to remove silt and blockages in drainages to drain out water from the affected areas.

To address the issue in a natural way, the Corporation has begun erecting rainwater harvesting pits in the city.

According to sources, ₹1.80 crore has been sanctioned for the project. The civic body has sourced its fund through the Smart City Mission. It will be implemented in Area Based Development (ABD) zone.

Under the project, pits will be dug to a depth of 50 square feet along roadsides identified as stagnation prone. At the centre of the pit, a bore well is dug to a depth of about 10 to 12 meters. An array of three to six plastic pipelines will be laid. The pits will then be covered with gravel, mud, filter and slabs. During rainy days run-off water will go down into the earth through the rainwater harvesting structures. It ultimately prevents water inundation besides recharging the groundwater.

The civic body has so far erected about 10 structures in Thillai Nagar and Woraiyur. They will come up at seven spots in Puthur. Madurai Road, West Boulevard Road and Thennur are among the areas selected for the project.

Corporation Commissioner P.M.N. Mujibur Rahuman told The Hindu that it had been planned to erect 135 RWH pits in different parts of the city. Most of the shortlisted places were identified as rainwater inundation-prone spots. The project had been initiated after studying the functioning of a few model pits established in the city. Around 50 RWH pits had so far been completed.

The project would be completed within a month. It would enable the city to harvest rain during the northeast monsoon.