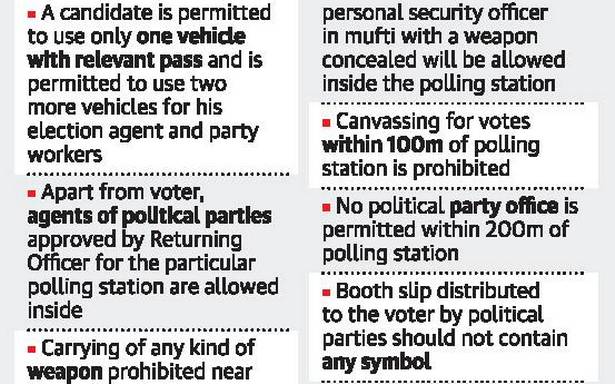 Around 30,000 personnel from the city police, Armed Reserve, Central Armed Police Forces, Home Guards and ex-servicemen have been deployed at over 2,000 polling stations in 24 constituencies in the Greater Chennai Police limits to ensure smooth polling on Tuesday.

Commissioner of Police Mahesh Kumar Aggarwal, along with the Additional Commissioners of Police, has been monitoring the large-scale security arrangements.

The Commissioner told The Hindu that all security arrangements were in place. “Public can come out and cast their votes without any hesitation or fear. They have been requested to take all COVID-19 precautions before casting their votes.”

“The ECI has norms for free and fair conduct of polls. All candidates should follow them. In case of violations, they can bring [them] to our notice. They can report either to the returning officer or the District Election Officer or the police officer concerned. They can also contact the police election control room. We will immediately attend to their complaint,” he said.

Up to three vehicles are permitted to be used by a candidate — one for the candidate and two others for chief agent and political supporters. All the three vehicles should have relevant passes issued by the District Election Officer. Any other vehicle found involved in any political work would be detained, he said.

A special mobile app has been created in Google Playstore to monitor the functioning of 792 mobile parties escorting the election officials collecting Electronic Voting Machines (EVMs) from distribution centres to polling stations. The movement of mobile teams are closely monitored by the senior officers. An election cell (ph: 044-23452437) has been functioning round the clock at the office of Police Commissioner in Vepery, and the cell can be contacted for any election-related complaint.