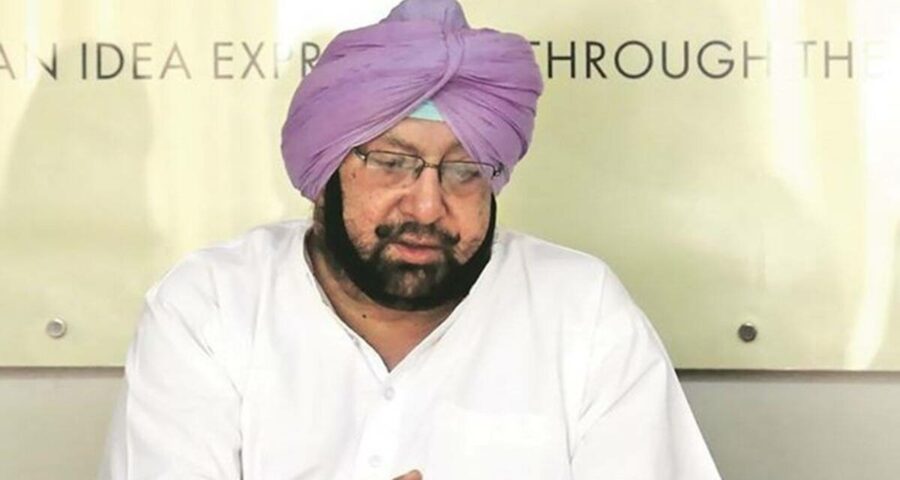 Chief Minister appeals to farmers to get themselves vaccinated Accusing Centre of “encroaching upon” the rights of states, Punjab Chief Minister Amarinder Singh Monday castigated the Union government for imposing farm laws and Direct Benefit Transfer (DBT) on state’s farmers in what he termed as “one-sided” decisions.

“Assi desh nu ann dita, kheti bhandaar assi bharey (we provided food grains to the country and filled the granaries of the country). As per the Constitution of India, agriculture is a state subject. The economy of Punjab is dependent on agriculture. You made farm laws without consulting the state, which has made maximum contribution to the nation’s food buffer,” Amarinder said.

Inaugurating a two-day virtual Kisan Mela of Punjab Agricultural University (PAU), the CM alleged that in the name of “so-called reforms”, the Centre was trying to destroy the existing relations and systems that had worked well for over 100 years. Punjab’s farmers and arhtiyas have enjoyed age-old cordial ties among them, which the Centre was “hell-bent on damaging”, he said.

“The Centre has deliberately impinged upon the state’s power, thus jeopardizing the basic structure of democracy…Had the Centre been sincere about finding a workable solution to this problem, it would have either consulted the Punjab government or the state’s farmers, as Punjab alone contributes over 40 per cent of foodgrain to the national pool,” he asserted.

Expressing grief over demise of farmers during the ongoing stir against farm laws, he added: “I stand with the farmers sitting along with their families at the borders of Delhi.”

Claiming that 144 farmers have died so far during their agitation, he said his government was giving Rs 5 lakh and a job to a kin of the deceased farmers, while the Centre continued to be “insensitive to their pain”.

CM urges farmers to get vaccinated

Speaking about the pandemic, Amarinder appealed to farmers to get vaccinated to protect themselves against coronavirus. He urged all Punjabis to take precautionary measures and follow the basic Covid protocol such as wearing masks, washing hands, and maintaining social distancing.

He asserted that though the situation in the state was alarming, he would “not allow it to become another Mumbai”.

Voicing his concern over depleting water resources in the state, he said, “The Himalayan glaciers are melting and the weather pattern is changing and this is going to affect Punjab. As per the 1985 report by the state water resource department, warnings were issued and dark zones were declared but ignoring those warnings, tubewells were installed in the dark zones. This has aggravated the water problem.”

Stating that Guru Nanak Dev Ji highlighted the importance of water in his teachings, he urged the farmers to shift to horticultural crops such as fruits and vegetables to save water. He also expressed concern over micronutrient deficiencies such as manganese and zinc deficiencies in various crops.

CM called upon the farmers to make judicious use of pesticides in basmati (for export purpose), and to follow advice of PAU experts. Referring to paddy straw management, he said besides power generation, new methods to be devised for the use of straw.

He suggested GADVASU to take initiative of embryo transfer.

Dr Baldev Singh Dhillon, Vice-Chancellor, PAU said that university’s tireless efforts have resulted in enhancing soil organic carbon (from 0.3 to 0.5) and use of biofertilizers, and bringing down fertilizer as well as pesticide usage. Neem has been recommended in cotton (for whitefly management), paddy and other crops for insect-pest management, he added.

“To give processing a boost, PAU has established a Skill Development Centre and Food Industry Business Incubation Centre where farmers can come to acquire training and avail incubational facilities,” he said.

Dhillon also advised the farmers to connect with PAU through Kheti Sandesh, Facebook Live programme, PAU Kisan App, PAU Farm Inputs App, etc. He informed that the state agriculture department in association with PAU is organising 1,000 training camps in 10,000 villages to guide the farmers regarding production and protection technologies for Kharif crops. In addition, he apprised the farmers of the machinery being developed by PAU for mat type nursery raising and pea harvesting.

Dr Inderjeet Singh, Vice-Chancellor, Guru Angad Dev Veterinary and Animal Sciences University (GADVASU), highlighted the efforts, activities and projects being run by his university for the development of animal husbandry. “A herbal preparation, under the Ministry of AYUSH, is underway with which farmers can cure the diseases in animals,” he said.