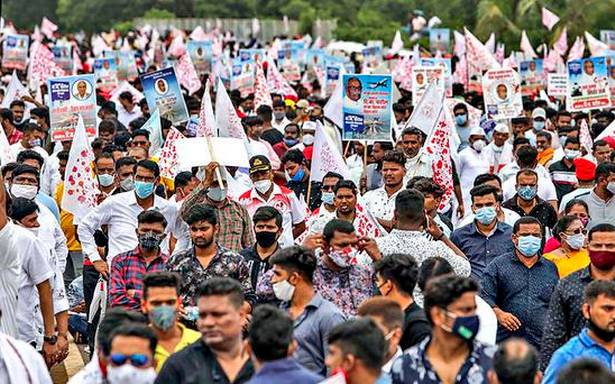 Thousands of people from Raigad, Thane and Palghar districts of Maharashtra gathered on Palm Beach Road and staged a protest on Thursday demanding that the under-construction Navi Mumbai international airport be named after the late Peasants and Workers’ Party (PWP) leader and parliamentarian Dinkar Balu Patil, who was popularly known as D.B. Patil, by August 15.

Protesters from Uran, Panvel, Thane and Mumbai converged on Palm Beach Road and near Killa junction outside the Navi Mumbai Municipal Corporation headquarters. The demonstrators, including project affected people, registered their protest over a proposal to name the airport after Shiv Sena founder late Bal Thackeray by dancing, playing musical instruments, and performing Vatt pooja.

“The performances are part of our culture and it was showcased to display our unity against this decision. Just like our art and culture, D.B. Patil too is an integral part of our lives. Whatever we are today is because of his struggle for the project affected people of Navi Mumbai. We are the sons of the soil and the government cannot ignore our pleas,” said a protester from Uran.

The protesters also raised slogans against the State-run City and Industrial Development Corporation (CIDCO), which is executing the project. The core members of the All Party Action Committee visited CIDCO Bhavan and submitted a letter demanding scrapping of the proposal to name the airport after Bal Thackeray, which was sanctioned in its board meeting. The members threatened to stop construction of the greenfield project if the demand was not met by August 15.

In December last year, State Urban Development Minister Eknath Shinde had written to the CIDCO, directing it to send a proposal to name the airport after the late Sena supremo. The proposal was subsequently granted sanction at a meeting of the CIDCO’s board members. On June 10, the State government also announced that the proposed airport would be named after Bal Thackeray.

Dashrath Patil, president of the All Party Action Committee, said, “CIDCO is just a puppet and is doing what the government wants. We respect Balasaheb Thackeray, but this airport is coming up on the land of project affected people and it has to be named after the one who fought for their rights.”

Till 4 p.m., the Sion-Panvel Highway and Palm Beach Road were barricaded by over 8,000 police personnel who manned the traffic and controlled the protestors. Deputy Commissioner of Police, Traffic, Purushottam Karad, said, “Traffic was diverted on Sion Panvel Highway and protesters were prevented from crowding the road, which was closed from 8 a.m. Heavy bandobast was deployed on Palm Beach Road and the stretch from NRI junction to Killa junction was shut. No untoward incidents were reported.”

The protesters went ahead with the agitation even though the police had denied them permission and a curfew was imposed in the city. “It was D.B. Patil’s death anniversary and hence we had decided to carry out the protest on June 24. Now, we are giving time to the government, but only till August 15. If the government does not name the airport after D.B. Patil. then the sons of the soil will not allow any work to take place at the airport site,” Prashant Thakur, an MLA from Panvel, said.