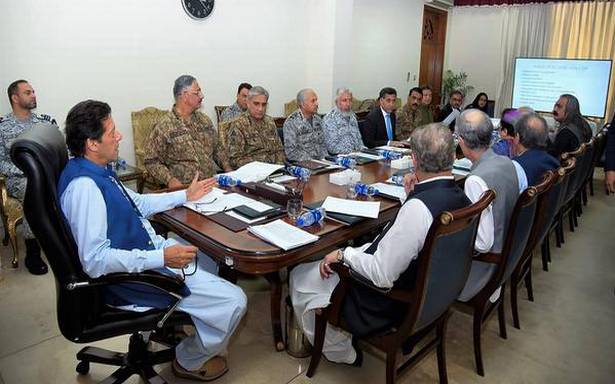 Without cooperative ties with India, the Pakistan people may not have human security or a successful economy

Significantly, a public version of the NSP has not been released as yet. According to a press release by the office of the Pakistan Prime Minister it will be done “in due course”. However, Pakistan’s National Security Adviser, Moeed W. Yusuf said on December 28 that it will be done within a week to 10 days. Should it be released soon, it would show that a kind of consensus has been achieved between the elected government and the Pakistan Army on the NSP. A delay, however, could be indicative of remaining difficulties.

But even if the army is ostensibly on board, the question is whether it is willing to turn Pakistan away, in the true sense, from being a hard military security state into a state where the military competes for resources with other state institutions and the final decision is taken by the political leadership. The logic of giving primacy to the economy is that national policies will be directed through resource allocation towards development. That would mark a fundamental change in Pakistan’s direction, for it would reduce the army’s demand for resources.

The Pakistan Army has always laid first claim on the country’s revenues. It has never allowed light to fully shine on the defence expenditure. Nor, for that matter, does it allow scrutiny of its vast network of business enterprises and real estate for the benefit of its officers and men. From time to time, some officers have laid stress on the importance of “geo-economics” but seldom has the army shown any willingness to divert resources from defence to other areas. And, it has convinced the majority of the people that sacrifices have to be made for national defence because of enemies external, principally India, and internal.

More than 40 years ago during Pakistan President Zia-ul-Haq’s period, a Pakistani comparing India to his own country told me that his country’s army controlled everything in the name of defence, but “what is it really defending but itself”? Despite the passage of time and the geo-political global and regional transformation, the veracity of my interlocutor’s assertion holds true today too. Thus, if the NSP is to mark a substantial change in Pakistan’s systems and governance, the first step has to be transparency in actual military expenditures and the dismantling of what the brave Pakistani scholar Ayesha Siddiqa terms as “Mil.Inc.”. That does not seem to be on the horizon.

In the NSP’s context, the question that Pakistan also needs to ask itself is this: can it ever achieve human security for its people and put the country on the path of normalcy and growth without radically changing its India policy? As the product of the two-nation theory, Pakistan has defined its very identity — to put it crudely but bluntly — thus: it is what India is not. Almost 75 years since its creation, Pakistan continues its search for a positive identity which will allow it to give up its India obsession. Its so-called commitment to the ‘Kashmir cause’ is a sub-set of its overall negative approach to India. This deep-seated hostility has prevented it from adopting rational policies towards India. Rational approaches would have enabled it to ‘legally’ adhere to its positions but ‘practically’ have ties with India in areas that would be in its national interest.

An example of its irrational approach is the position it has taken on the Jammu and Kashmir (J&K) issue after the constitutional changes of August 5, 2019. Pakistan could have maintained its stand on J&K and yet traded with India as that was in its interest to do so. Instead, it decided to suspend the abridged commercial relationship that existed. Countries can adopt selective approaches to register protests. A sacrifice of interests is especially futile where such sacrifice does not yield results as it obviously has not, from Pakistan’s standpoint, on J&K developments, post 2019.

While Pakistan’s ideology and mindset prevents it from developing realistic ties with India, it also has a bearing on its social development and the economic management of the country apart from draining resources from development to defence. Pakistan aspires to become a society imbued with moderate Islamic faith. However, its security apparatus has actively sought to use Islamism against India. This has led it to pander to violent sectarian groups and marginalise progressive elements of civil society. The culture of Islamism is illustrated by the veneration of the grave of Mumtaz Qadri, the killer of Punjab Governor Salman Taseer. It is astonishing that Qadri who was executed for the crime of murdering one he was duty bound to protect was lauded by millions for serving the cause of Islam by killing Taseer who was perceived to be sympathising with a blasphemy accused. There is another aspect. Islamist forces are also allies of feudal elements in the Pakistani political elite, and together they support inimical and irrational policies towards India, including in economic and commercial sectors.

The natural economic partner for a country such as Pakistan is a large neighbour. This is especially so in an era when economies are not barricaded as some were for several decades in the second half of the previous century. Stoutly refusing to open up trade with India, Pakistan has looked to other economic and commercial partners among whom China is by far the most important. The security relationship was the anchor of the China-Pakistan ties. Now, Pakistan hopes that China will offer its assistance to transform its economy. It looks to the mechanisms under the China-Pakistan Economic Corridor (CPEC) to play a crucial role through connectivity, port development, power production and other investments. All this may be of some help but they cannot be a substitute to be integrated with a large neighbouring economy.

That can only come about with the opening of trade and connectivity with India. Over 25 years ago, Chinese President Jiang Zemin had, in an address to the Pakistani Senate, spoken of the need to temporarily shelve disputes so that they do not impact inter-state ties. He may have mentioned this in the context of Chinese-South Asian ties, but these comments applied to Pakistani approaches to its neighbours as well. But Jiang Zemin’s words were simply ignored by the Pakistanis. Today, with the regional and international context entirely changed, it is unlikely that President Xi Jinping will give Pakistan the same advice. However, that does not erode the veracity of Jiang Zemin’s views.

Thus, irrespective of what the NSP may state, the Pakistan people can neither have human security nor a successful economy without cooperative ties with India. That the Pakistan Army and the political elite are unwilling to have. The NSP, therefore, cannot change Pakistan’s unhappy direction.