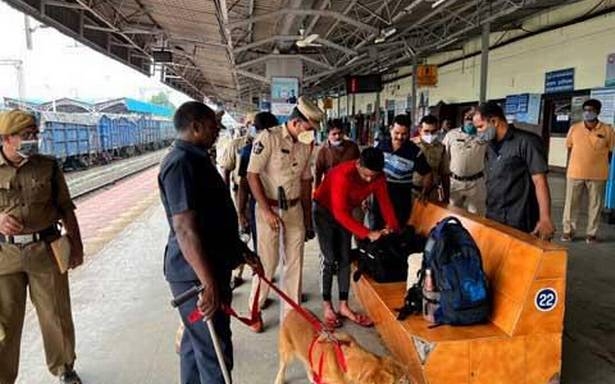 The Government Railway Police (GRP), Vijayawada district, has registered 1,520 cases in 2021, of which 826 were suspicious deaths and 234 were suicides, said Superintendent of Railway Police (SRP), Rahul Dev Singh. Suicide deaths in 2020 were 137.

Releasing the annual crime data in Railway Police District, Vijayawada, which comprises seven districts including Krishna, Guntur, East Godavari, Visakhapatnam, West Godavari, Srikakulam and Vizianagaram districts, on Monday, the SP said that 116 persons died by falling off running trains, which was 109 last year, and 351 deaths occurred due to tresspass on to the tracks, which was 230 in 2020.

Sixty-six natural deaths were reported while travelling by train, three died due to electric shock and 56 passengers died of other reasons, Mr. Rahul Dev said.

Of the 826 suspicious deaths, 618 victims (deceased) were identified and the bodies handed over to the bereaved family members. Efforts are on to identify the remaining victims, he said.

Railway police registered 493 thefts compared to 378 in the previous year, and the value of property lost was ₹32 lakh. Of the 493 thefts, 178 cases were detected and the GRP received 240 calls from the passengers on various reasons. Escort was arranged in 60 moving trains to prevent thefts, the SP said.

Under ‘Operation Muskaan’, police rescued 90 children, and reunited them with their parents. Police booked cases against 4,931 passengers for violating COVID-19 norms and moving in trains and railway premises without wearing masks. They collected ₹5.77 lakh penalties from them, Mr. Rahul Dev Singh said.

The railway police opened 320 new history sheets against the criminals. In all, 1,178 history sheeters are there in Vijayawada Railway Police district, and strict vigil is being maintained on the suspect and criminals involved in various offences on trains and in the stations, the SP added.