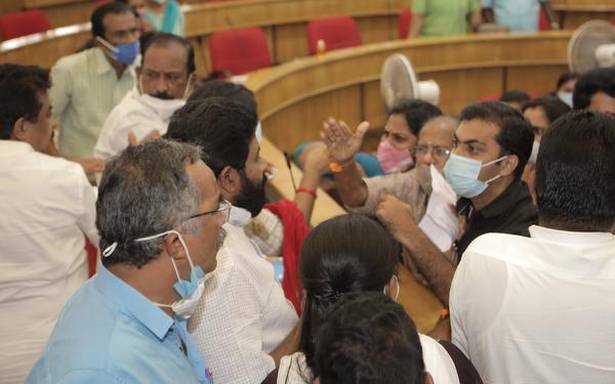 The city Corporation council witnessed unruly scenes for the second time in a week, with councillors of the Opposition Bharatiya Janata Party (BJP) disrupting the proceedings, demanding a discussion on issues related to revenue collection.

Refusing permission for the discussion, the Mayor said it was the Corporation administration itself that had unearthed the corruption carried out by some officials in zonal offices, and it was not right for others to claim credit for the same and blame the administration.

However, the BJP councillors continued their sloganeering, displaying placards and flex-boards, accusing the ruling LDF of aiding corruption, prompting the LDF councillors to accuse the BJP of coming prepared for a protest and refusing to take part in any discussion.