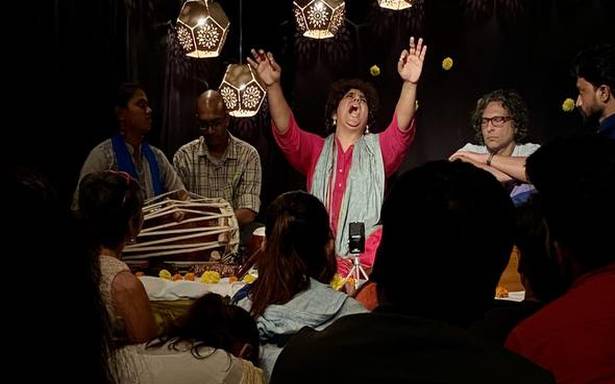 Feminism from a non-western angle

Goethe-Institut’s project ‘Movements and Moments’ sheds light on indigenous feminist activisms from the global south in the form of comics.

The narratives of feminism are still written from a predominantly white, western perspective. Little information about the movements in the global south and their activists is accessible in large knowledge databases such as Wikipedia, and even in the respective native regions of these feminist activists, their achievements are often not archived because resources are too scarce or their demands are not thematised.

Goethe-Institut Jakarta’s project ‘Movements and Moments – Feminist Generations’ aims to make visible these hidden biographies and activisms. Bengaluru’s Aravani Art Project is among the featured works. This comic follows the lives of urban transwomen in collective living in the city.

Theatre For Change founder Sujatha Balakrishnan is putting together a short video for Mothers Day, wherein mothers from different backgrounds talk about what kind of world they want for their children.

Sujatha, who is a psychologist, says that she found parents being a part of an unhealthy social competition, which impacts their children. “When I take my 18-month old granddaughter out, I hear comments like, ‘Has your toddler started taking his first step? Mine started quite early’ and ‘What, he hasn’t started talking? Maybe you should consult a speech therapist!’ Unintentionally, helicopter parenting moms are aborting infanthood and childhood fun,” she says.

Lakshmi Sunil is one of the mothers who is featured in the video. She has a two-year-old boy, who likes to dance, to play with a kitchen set and dolls, and the colour pink. “Some people say ‘He is a boy. Why do you buy him dolls and kitchen sets? Shouldn’t you make him play cricket and football instead? Why do you make him wear pink? Isn’t it for girls?’ There are gender norms even for a two-year-old baby. I want my baby to grow up in a society where he has the freedom to make his own life choices,” she says.

The mothers in the video, mention two adjectives that describe the kind of the future they wish for their children. Lakshmi has chosen ‘non-judgmental’ and ‘open-minded’.

The video, which was put together with the help of editor Reshma Krishnan, will be out on Theatre For Change’s social media pages on Mothers Day (May 9).

You can also order special meals for your mothers on Sunday. UB City mall is launching Bento Box meals – ‘Oakwood Treats’. There are an assortment of dishes, vegetarian and non-vegetarian, which can be delivered via Swiggy or Zomato.

When: May 8 to 10 Where: Smoke House Deli Cost: Rs 2400 onwards (for four people) Contact: smokehousedeli.dotpe.in