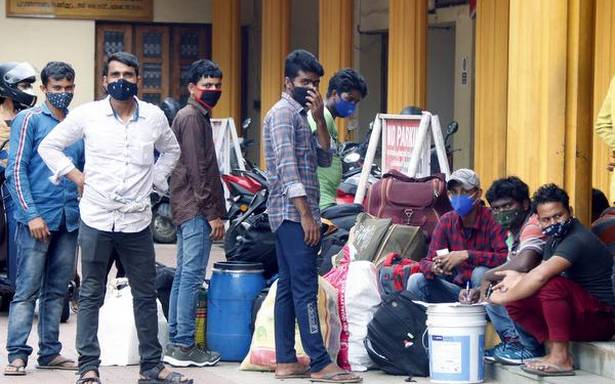 A majority of them are choosing to stay back, reassured by their employers’ promise of care during the lockdown and guarantee of jobs thereafter

The government decision to go for a week-long State-wide lockdown seems to have evoked mixed response among the migrant community, going by the initial signs a day before the lockdown.

Notwithstanding the reflex impulse among the community to return home at the first sign of uncertainty, a majority of the migrant workers engaged by contractors seems to have chosen to stay back at least for the time being, reassured by their employers’ promise of care during the lockdown and guarantee of jobs thereafter. The same, however, cannot be said about the footloose migrants left to fend for themselves.

"They have a desire to return home since the lockdown will render them jobless, making their stay infeasible. It is better for the jobless migrants to return home, as, unlike the last lockdown when they were well taken care of, the healthcare sector and the civil society organisations remain crippled by the fresh onslaught of the pandemic this time. But non-payment of wages are holding them back at many places," says Benoy Peter, executive director, Centre for Migration and Inclusive Development.

He says that while there is no panic scramble to return home among migrants as of now, it may change if fatalities rise either here or among their families back in their home States.

S. Chithra, State Labour Commissioner, too says that there is no trend of a panic return visible yet. "District collectors and joint labour commissioners have also confirmed it. Migrants seem to be happy with assured work and high wages here. Besides, a large section of those who desired to return have already done so," she says.

It also seems likely that the government may permit works engaging migrant workers, provided it involves little movement and is contained within a small area. While civil society organisations complain that train tickets are not readily available, the Railways paint a different picture.

"We have introduced special trains in the West Bengal, Uttar Pradesh and Bihar belt, which is much in demand among migrant woorkers. Reservation counters are working between 8 a.m. and 8 p.m. like during the pre-COVID days though migrants seem more comfortable with online booking. The Southern Railways headquarters is monitoring the reservation pattern and will introduce more trains if so warranted. Most special trains have been introduced from Ernakulam and Thiruvananthapuram," says a Railway spokesperson.

He points out that there is no excessive rush at railway stations on account of the crowd control management system by the Railway Protection Force (RPF) and proper dissemination of information about railway services among migrants by the Labour Department.

RPF sources say access control has been tightened and crowd management measures with access restricted only to those with confirmed tickets and through a single entry. Even the Aluva railway station, known as the main transit hub of migrants, did not experience much rush on Friday.

"In fact, the train to Gorakhpur in Uttar Pradesh had passed Aluva on Friday morning with only about 50% occupancy compared to trains on Thursday evening that operated full," inform RPF sources at Aluva.

Meanwhile, private contract carriages operating long-distance trips, the preferred choice of migrants of late, have chosen to suspend their services pending further directions from the government.

"Our association has decided to schedule only services that will cross the Walayar border at the latest by Friday midnight. Besides, the suspension of KSRTC services may hamper the access of migrants to our services since they come from various districts," says P. I. Tencen, who has been operating up to three such services a day from Ernakulam.

Routes have been scheduled depending on demand, and recently, services have been mostly operated to West Bengal and, before that, Assam, he says.