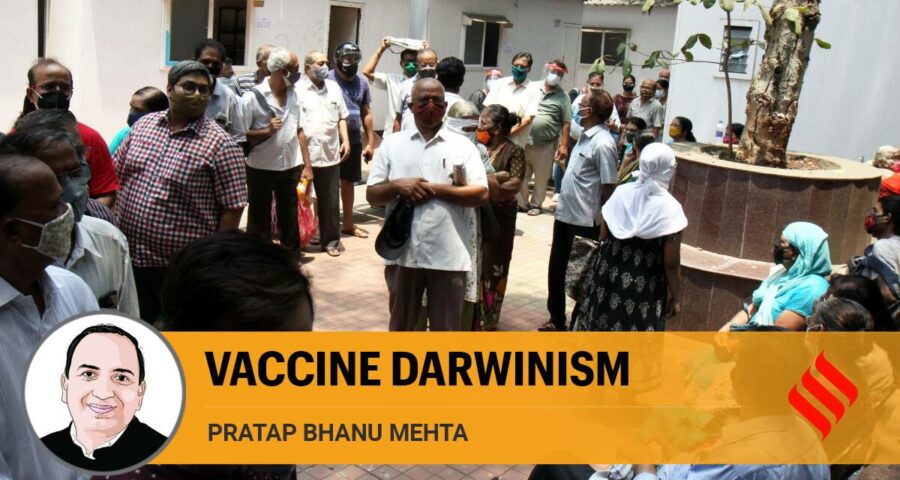 Pratap Bhanu Mehta writes: Our vaccine policy reflects an ad hoc social Darwinism, where the strong do what they can and the weak suffer because they must 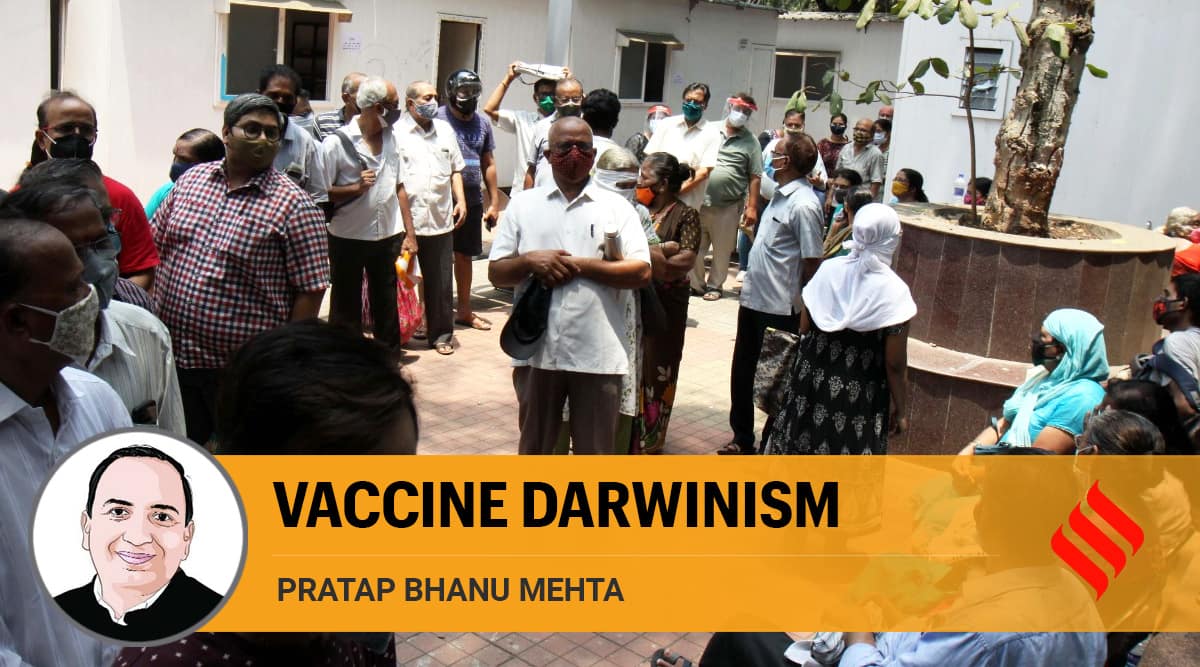 In the face of India’s catastrophic pandemic, the tongue goes silent and the pens fall dry. What can one say that is meaningful? There is seldom any consoling story to be told about grief or mass suffering. There are brave journalists bearing witness. But what does bearing witness do in a culture of official nationalism where the images of death offend more than death itself? There is an urgent need to fix several policies. But what do policy proposals mean, when all policy is about managing headlines, not achieving an objective? There is a need to fix accountability. But how does accountability get fixed when so many institutional sinews from federalism to bureaucracy have snapped? There is justifiable anger at the Prime Minister, whose self-obsessive callousness and abdication of leadership has contributed immeasurably to the current crisis. But in the case of this government, anger seems misplaced. Anger presumes a leader who is standing within the space of reason, where the point of anger is to restore a certain reciprocity between citizen and leader. Anger is completely beside the point, when you have an imperious leader, who has come to mistake the hologram of his own mendacity for reality. In any case, the scenes of suffering make even anger a luxury; there are more urgent tasks to be attended to.

The only empowering thought in this context has been the splendid work that professionals, frontline government workers, health professionals and volunteers are doing to compensate for massive state failure. The extraordinary mobilisation of civic action whether in supplying oxygen or cremating the dead has been exemplary. These are, of course, sometimes limited by class and geography, but it would be churlish to deny the depth of commitment of what we are witnessing. This civic commitment has helped mitigate suffering. It provides slivers of solidarity in a politics that has long forgotten that word.

India has always been a tough place; the callousness that comes with inequality is deeply inscribed in our social structure. Politics was supposed to mitigate at least the harshest edges of this inequality. Instead, what we are seeing in the politics of the BJP is the unleashing of an unvarnished social Darwinism, a ruthless exercise of power on behalf of the powerful: Majorities against minorities, state against dissenters, and big capital against small. The spectre of more repression being unleashed to manage the post-pandemic discontent cannot be ruled out. The question is this: Will these rudiments of public solidarity on display counter deadly social Darwinism that our official politics has become?

Perhaps, a good test case is something urgent: A reconsideration of our vaccine policy. The three basic ingredients of a vaccine policy for a pandemic of this kind are clear. Do whatever it takes to make sure there are enough supplies (the right procurement contract, capital subsidies, capacity expansion, and, if need be, the suspension of intellectual property rights). Centrally procure vaccines, but give states operational flexibility. And distribute them free. This is essentially what the United States did. And do all of this as fast as possible, if we are to prevent new mutants from arising.

Instead, what we got in vaccine policy is a bizarre combination of ruthlessness and managing the headlines. First, there is a scarcity of vaccines and will be for a while because we did not get our capacity expansion and procurement contracts right. Then you had the pandemic surge in some states, which raised two questions: How much operational flexibility can be given to the states? And how much does it make sense to reallocate vaccines to states or districts where they are most urgently needed? These questions could have been easily resolved by a modicum of trust building. But instead, we try to cover up the scarcity and prioritisation question by managing the headline. We unleash a Darwinian competition between states on procurement. The demands of the states could have been resolved in better ways. Now some states will make the vaccines free. But there is a greater opportunity cost to the states doing this. They have less resources than the Centre. And there is high probability that they will divert money from other essential services.

Then, to deflect attention we open up vaccinations for all age groups. The controlled media claps. But you have exacerbated the problem: If supplies are scarce, opening it up to a free-for-all accentuates the allocation problem. Now allocation will be based on whoever can lay their hands on the vaccine, not what is best suited to combat the virus and reduce health burdens. You then say there will be differential pricing. In essence, those who can afford to get them at private sector rates shall get them more easily. The argument is that they will cross-subsidise. This is a specious argument; if people want to genuinely fund cross-subsidies in health, better to collect it as taxes and create public goods, not distribute vaccines as a privileged good under scarcity.

In the meantime, our supply strategy is still not clear. There are no reliable schedules of production targets. You offer Serum Institute of India what seems like an unsustainable price, and slow their capacity expansion, by delaying whatever capital subsidies were necessary. Bharat Biotech then announces a price that is too high, and surely the Prime Minister will step in to reduce the price and claim credit. Meanwhile, you have to wonder at this. India and South Africa have, at the WTO, rightly called for a temporary suspension of patents on COVID-19 vaccines. Why don’t we set an example and do this ourselves with Bharat Biotech and take away its production rights? Let any company produce the vaccine. There are ways of doing this that still allow the company to make enough money and invest in R&D. It will also be a better way of positioning Indian brands and India globally than to try and position yourself as a monopoly supplier. In any case, some of the research is publicly funded and should be treated as a public good.

In miniature, this is an illustration of how vaccine policy is made. There is no logic of incentives or cross-subsidies or a free market in these decisions. There is no epidemiological logic. This is ad hoc social Darwinism. The strong do what they can, the weak suffer what they must. A perfect metaphor for our healthcare system. This is the moment to convert private acts of kindness into demands for a different public health culture. We can start by demanding a reconsideration of our vaccine strategy, and then think of larger political change.

This column first appeared in the print edition on April 28, 2021 under the title ‘Vaccine Darwinism’. The writer is contributing editor, The Indian Express.