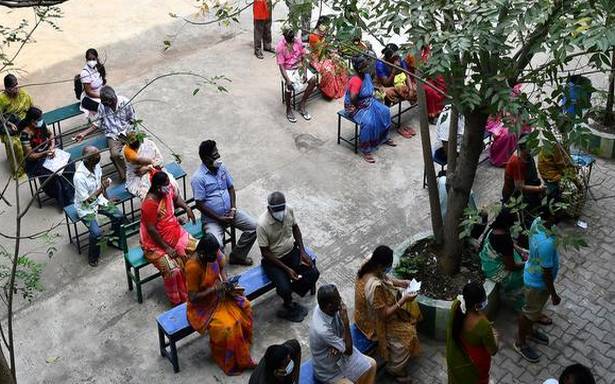 Around 15 countries including the US, Russia, France and the United Kingdom are rushing critical emergency use equipment to enable India counter the COVID-19’s deadly second wave. A compilation from the Ministry of External Affairs showed that countries are sending hundreds of oxygen concentrators, respirators and large quantities of liquid oxygen to help ease the difficult situation facing India.

Registrations for an appointment for a vaccine will begin at 4 pm on Wednesday, April 28, 2021, a spokesperson for the Health Ministry confirmed to The Hindu.

With the Centre opening up vaccine availability to all from 18-44 from May 1, it also announced registrations from April 28, but without specifying a time.Several began attempting a registration after midnight of the 27th and were unsuccessful. As of Wednesday, April 28 morning, the Cowin web portal, disallowed registrations to those born after 1976.P roviding vaccines to those between 18-44 for now appears largely to be the responsibility of States. They’re expected to negotiate with vaccine companies directly for 50% of the vaccines produced every month.

The Centre will have access to the other half and will continue with its free vaccination programme to those above 45. So far, there have been no announcements by states of having signed any agreement with vaccine company though many have stated that they will provide vaccines for free. Therefore there is uncertainty on whether vaccines will actually be available from May 1 for those below 45.

It is for the first that the State has breached 8000-mark causing a significant worry for the government. The State reported an increase of 2,313 cases – highest ever single day growth — over 6,073 cases reported on Tuesday.

Khordha, of which capital city of Bhubaneswar is a part, is the worst affected district reporting 1840 cases alone. Khordha is followed by Sundargarh with 933 cases and Jharsuguda 433 cases respectively.

A worrying signal from the Secretariat

An increase in COVID-19 cases among the employees of the Secretariat has become a cause for concern. A section of them wonders why the government has not deployed the staff in rotation as it did during the first wave last year.

“Last year, when there was a spurt in the cases, the government decided to allow only 50% of the staff to go to offices. This year, a huge number of cases are reported every other day, but the government is yet to decide [on the rotation],” said G. Venkatesan, former secretary of Tamil Nadu Secretariat Association.

Doctors divided over use but scramble for Remdesivir continues

The scramble for Remdesivir, the anti-viral drug used in COVID-19 management, is increasing by the day even as doctors are divided on its use. While a few doctors are of the opinion that not all require this drug, many say it hastens recovery and helps bring down the viral load if given early.

Amid the spiralling number of COVID-19 positive cases, a Group of Ministers (GoM) from Rajasthan visited New Delhi on Tuesday to apprise the Centre of the shortage of medical oxygen and essential medicines, which was posing a difficulty in the treatment of serious patients. The State recorded the highest single-day rise in the death toll with 121 persons succumbing to the infection.

Chief Minister Arvind Kejriwal on Tuesday said that the Delhi government would, with the help of the Centre, import 21 ready-to-use oxygen plants from France and 18 oxygen tankers from Bangkok, to ensure a steady supply of oxygen in hospitals across the Capital.

He thanked the Centre for allotting five additional oxygen tankers to Delhi and said that within the next month, the Delhi government will install 44 oxygen plants out of which eight plants will be installed by the Central government.