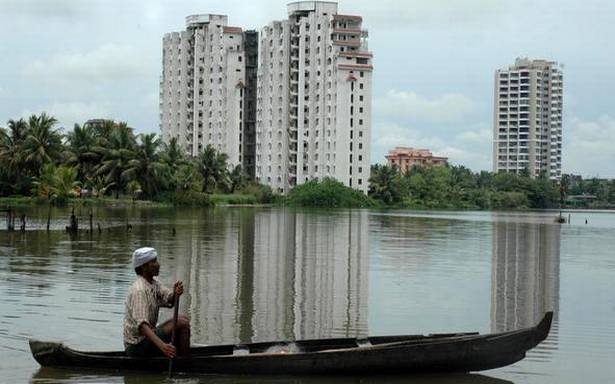 While Kerala’s achievements in human development are well-known, there is a widespread misconception that Kerala has not had much economic growth.

The ‘Kerala Model’ showed that a country or a region need not wait till it becomes rich to bring about significant improvements in people’s material conditions of living, and that people’s movements can be the driving force of such changes by forcing governments to adopt redistributive measures and other programmes.

When growth picked up

Economic stagnation in the 1970s and 1980s led many observers to predict the collapse of the Kerala model. They argued that the slow-growing State would not have the money to continue financing its welfare programmes.

But a fundamental change occurred by the late 1980s — Kerala’s economic growth picked up. Growth in agricultural incomes and in remittances provided the spur for a ‘long boom’ in the subsequent decades. While services grew the fastest, the secondary sector (which includes manufacturing, construction, etc.) also experienced significant growth; the proportion of the workforce engaged in the secondary sector, which was 20% in 1987-88, grew to 32% in 2018-19.

During this period, Kerala’s education and health indicators continued to improve, and its social security programmes continued to expand. But public schools and public hospitals often fell into disrepair, with inadequate facilities forcing many people to turn towards private service providers. The number of students enrolled in public schools fell steeply.

However, the last five years have seen major investments to build up infrastructure in public schools and public hospitals. More than 45,000 classrooms in 4,752 public schools have been turned ‘hi-tech’, while new, bigger and better buildings have been constructed for public schools. These efforts have had a major impact: the number of students in public schools began to increase from 2018-19 onwards. This was taking place for the first time in more than 25 years. Similar infrastructural upgrades have been made in the case of public hospitals too, which was an important factor that allowed Kerala to fight the novel coronavirus pandemic relatively well.

Investments that came in through the Kerala Infrastructure Investment Fund Board (KIIFB) provided the most crucial element which made these investments possible. Apart from schools and hospitals, KIIFB funding is being used to build economic infrastructure such as roads, bridges, industrial parks, the massive public sector Internet project K-FON, or the Kerala Fibre Optic Network, and TransGrid 2.0 — a project to improve the power transmission network in the State

All these constitute a major change from the earlier scenario when Kerala found it difficult to fund capital expenditure that is necessary to upgrade its infrastructure. Continuous assaults on fiscal federalism, and the Centre putting harsh limits on States’ borrowing have made things very difficult for State governments. The Goods and Services Tax has dealt a terrible blow to the ability of the States to tax commodities according to their own specific conditions and development priorities. It is in this context that the KIIFB was brought in as a major funding arm of the Kerala government.

The KIIFB raised funds from the financial market and made them available to the government to finance infrastructure projects which otherwise would have taken decades to materialise. Repayment of the loans is ensured by the government legally committing to pay a portion of its revenue from the motor vehicle tax and the petroleum cess to the KIIFB every year. The idea is that higher capital investments would help stimulate economic growth, which would in turn lead to higher tax revenues as well.

Concerns have been raised whether Kerala is taking on unsustainable levels of debt. The KIIFB loans are not part of public debt, and even if they are included, they would make only a marginal difference to the stock of outstanding debt. Data show that there have been several years during the past three decades when the ratio of Kerala’s outstanding debt to gross State domestic product (GSDP) was higher than it is today (36%). Those years followed a period in the late 1990s when there were serious setbacks to the commodity-producing sectors of the economy (prices of major cash crops had crashed).

The current period is also similar, with the State having had to endure severe floods in 2018 and 2019, and the pandemic-induced worldwide recession. These led to huge unforeseen expenses, even as economic growth and tax revenue growth suffered.

Rather than debt, therefore, the real risks are likely to be associated with shocks to the economy — such as natural disasters, job losses in the West Asian countries where a lot of Keralites work, or contractionary fiscal policy by the central government — which could adversely impact economic growth. Even then, Kerala will be better prepared to face the eventualities if it has better infrastructure, and a better-educated, more highly skilled and healthier workforce.

The Left Democratic Front’s ambitious vision of the future of the Kerala economy is reflected in its manifesto. It lays much emphasis on substantially raising enrolment in higher education along with improving its quality, and on fostering the systematic application of science and technology in a range of sectors. How the benefits of the growth that will occur would be distributed across different sections of society will depend, among others, on the intervention of various organised sections of the working people, particularly to support and expand the role of the public sector and cooperatives.

The United Democratic Front has also come up with its manifesto, and it has not fallen behind in promising a number of welfare measures. But a coherent strategy regarding the path that Kerala should take is yet to be articulated by the UDF. If past experience is any indication, the UDF at the helm would mean less planned intervention by the government in the sphere of the economy and less attention to the public sector. That approach, however, is likely to be inadequate to meet the challenges that lie ahead. Apart from considerations of equity, the added risk of climate change which brings with it phenomena such as more frequent extreme weather events point to the need for an even greater, not lesser, role for planning and social oversight over the process of economic development in the State.

Subin Dennis is an economist at Tricontinental Research. The views expressed are personal