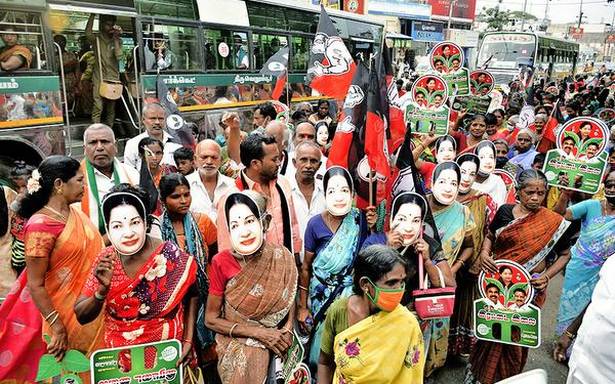 There are 23,28,745 voters in nine Assembly constituencies

Candidates were entirely engrossed in their campaign for the Assembly election as the deadline — Sunday evening — got closer.

With the Election Commission extending the deadline for the campaign from 5 p.m to 7 p.m on the last day of the campaign, candidates of recognised and registered parties and independents made use of the opportunity to canvass votes in the evening.

After the sweltering heat of the last three weeks, they could conclude their campaign in a relaxed atmosphere.

Until the 2019 parliamentary elections, political parties and candidates conducted two-wheeler rallies on the last day of the campaign as a show of strength. They would mobilise a large number of vehicles for the rallies. But such events were not visible on Sunday as officials denied permission.

However, the candidates, accompanied by their supporters and party cadre, chose to conclude their campaign in thickly populated areas.

His AIADMK counterpart P. Kumar took out a whirlwind tour in different parts of the constituency to woo voters.

AIADMK candidate of Srirangam constituency Ku.Pa. Krishnan and his DMK and AMMK counterparts Palaniandi and Sarubala R. Thondaiman carried out last-minute campaigns in different parts of the constituency.

Collector and District Election Officer S. Divyadarshini had made it clear that none should undertake canvassing for votes in any form beyond the deadline.

The static surveillance teams and flying squads monitored the activities of the political parties round the clock.

The parties were told that stern action would be taken if voters were bribed with cash.