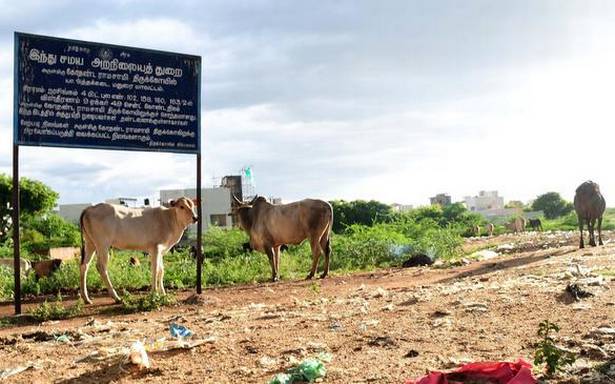 ‘Form a team comprising experts to educate and sensitise the people’

Taking serious note of the fact that the land belonging to the Kothandaramasamy Temple in Y. Othakadai was being used to dump garbage and for open defecation, the Madurai Bench of the Madras High Court directed the Madurai Collector to form a team comprising experts in order to educate the people.

A Division Bench of Justices T. S. Sivagnanam and S. Ananthi observed that people have to be sensitised. The court also took note of the fact that sewage was let into a PWD canal that was abutting the temple land and directed the authorities to take action against the people involved in such activities.

The court directed the authorities to conduct periodic inspections in order to ensure that the temple land and the canal were properly maintained. The court hoped that the menace would be stopped. The authorities could use pamphlets to educate the people, the court said.

The court was informed that the temple land measuring 9.49 acres was fenced now. But, the local people were still trying to use the land to dump garbage and were letting sewage in the canal. The court said the authorities concerned could cut off the water supply of the people who indulged in such activities.

The court was hearing the public interest litigation petition filed by K. Kavitha, a resident of Y. Othakadai.