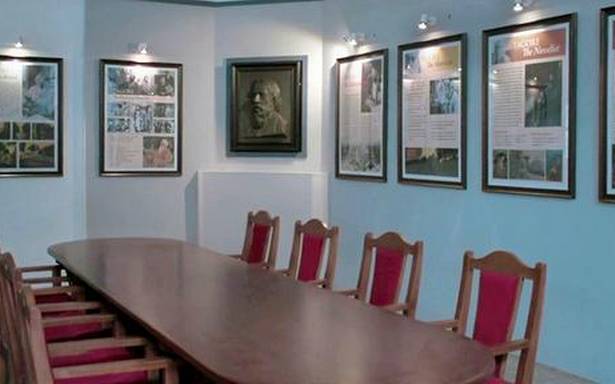 The University of Kerala is set to commemorate the centenary of celebrated poet Rabindranath Tagore’s visit to the State with the launch of a reference section at the university library in Palayam.

Following several aborted plans, Tagore visited Kerala on November 9, 1922, when he was accorded a grand reception in a three-storied pavilion that had been erected where the library stands today.

The recital by C. Kesavan of Divya Kokilam, penned by poet-social reformer Kumaranasan as a tribute to Tagore, added charm to the event.

Commemorating the occasion, KU has established the ‘Tagore Niketan Reading Corner’ that will be exclusively dedicated for Tagore studies. The efforts are also part of the university’s endeavour to revive the Tagore Endowment. on the occasion of the poet’s 160th birth anniversary being observed this year.

According to Pro Vice Chancellor P.P. Ajayakumar, the endowment that had been established in 1964 with an initial allocation of ₹4 lakh has been inactive for long. Efforts were being made to revive the endowment, now renamed as Tagore Niketan, by organising yearly lecture series and a publication.

The library reference section, established at a cost of ₹9.8 lakh allocated in the university’s budget last year, will provide access to a wide range of books by and on Tagore in different languages, including Bengali, biographic materials, copies of rare documents such as correspondence relating to Tagore’s visit in 1922, and albums containing copies of Tagore’s acclaimed paintings.

A bust of the poet created as relief art in bronze and ten elaborate panels that document his multifaceted achievements and contributions also adorn the wall of the section.

The Tagore Niketan Reading Corner can be accessed by the university’s students, research scholars, staff, and graduate members of the library.