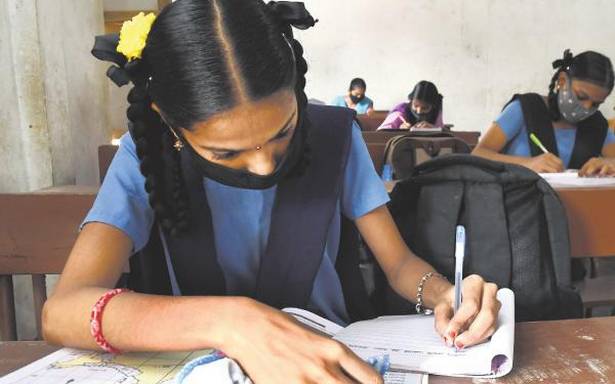 With nearly half of the academic year lost to the pandemic, teachers are not sure if syllabus for Class X can be completed in time for final exams, amidst third wave fear triggered by new variant Omicron

The students and teachers of schools across the State have been attending classwork daily for the past couple of months braving the pandemic. Though there were no official instructions to schools regarding the resumption of regular classwork, students of both government and private schools have been attending classes every day from around October intending to cover the maximum syllabus.

With only two to three months left for the final examinations, the completion of syllabus has now become a challenge. The emergence of new and highly transmissible COVID-19 variant Omicron and predictions of the possible third wave in January or February has made it a more challenging task.

Usually, for Class X, the entire syllabus is completed by the end of December and students have time to revise the syllabus at least twice before going for the public examination in March. The current situation, however, is different, according to teachers.

“Between August and September classes were conducted only on alternate days and the regular classwork resumed in October. The Class X syllabus used to be completed by December and there used to be two months for revision. Now, though the syllabus could be completed by February, there is no scope for revision. Students are already lagging behind due to the long gap caused by the pandemic and many of them are disoriented,” says S. Ramakrishna, president, AP Municipal Teachers’ Federation.

“As far as the municipal schools are concerned, the number of students increased by 20% due to closure of small private schools in the pandemic and other reasons. But the number of teachers remained the same and it is tough to handle a class of 60-70 students. This will impact the result of final examinations like it did in Telangana where the pass percentage of intermediate first year was less than 50%. The government should consider this extraordinary situation and come up with alternative exam paper patterns with only multiple-choice questions and short answer questions,” he opines.

“We are doing our best to cover the given syllabus in the time remaining. However, we are not sure if we can complete it properly. For that, we have to ensure that students understand the subject and are prepared to face examination at least to some extent. In the current situation, they are unable to keep pace,” says V. Vijaya, a teacher at a corporate school in the city.

AP United Teachers’ Federation State secretary P. Babu Reddy says that due to the long gap students are lagging in understanding the subjects and are unable to pick up the pace. "It is a universal phenomenon and it seems there is no remedy for it. There are two unit tests scheduled, one in December and one in February, and if there is no scope for holding final examinations, the marks obtained in these tests might be considered for awarding final result," he adds.