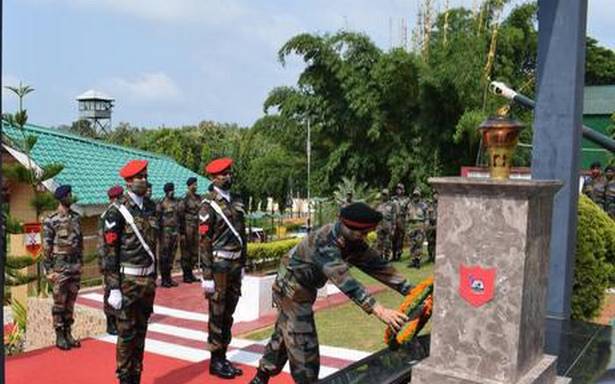 It would head to Manipur after a couple of days of halt here, he said.

The victory flame of Swarnim Vijay Varsh, commemorating the 50th-anniversary of India’s win against Pakistan in the war of 1971, reached Nagaland capital Kohima on Monday.

Addressing a gathering, he said that the victory flame reached Nagaland’s Rangapahar Military Station of the Spear Corps in Dimapur on Saturday from Jorhat, Assam, and arrived here in the morning.

It is a "proud and momentous" occasion to receive the flame, which was lit by Prime Minister Narendra Modi from the National War memorial on December 16, 2020, the inspector general of Assam Rifles (North) said.

It reached Kohima after crossing several towns and cities, which happen to be hometown of soldiers who fought the historic 1971 war, he stated.

It would head to Manipur after a couple of days of halt here, he said.

The flame is a hallmark of valour, sacrifice and fortitude of the great soldiers of the nation, Maj. Gen. Kaushik maintained.

Felicitating eight brave 1971 war veterans from Kohima and nearby areas, the officer said "we sincerely salute them with respect".

"We remember the bravery of gallant soldiers like you who scripted victory in the 1971 war… you are a source of inspiration for all of us and I am sanguine that youth will continue to imbibe your qualities as lessons of their lifetime," he said.

The ceremony was also marked by wreath-laying at the Garrison War Memorial, tree plantation and screening of a documentary on the 1971 war.

Nagaland Director General of Police T. J. Longkumer and officers from different armed forces were among those who attended the programme.