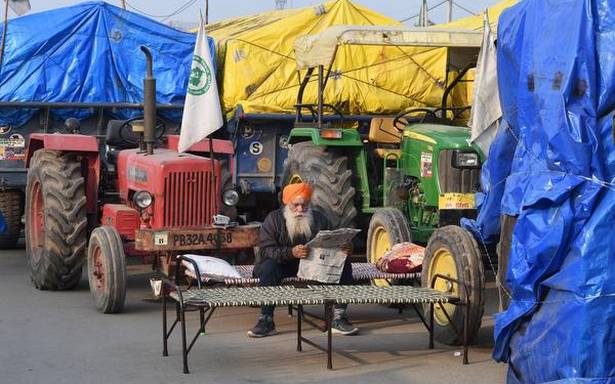 Such a protest by farmers would cause an embarrassment to the nation, says Centre.

The Supreme Court agreed on Tuesday to examine a plea made by the Centre, through the Delhi Police, seeking an injunction order against any proposed tractor, trolley or vehicle march or any other kind of protest by farmers to “disrupt” the Republic Day events.

A three-judge Bench led by Chief Justice of India Sharad A. Bobde issued notice, returnable on January 18, on the government’s application.

“It has come to the knowledge of the security agencies through various sources that a small group of protesting individuals/organisations have planned to carry out a tractor/trolley/vehicle march on Republic Day. The proposed march is slated to disturb and disrupt the august celebrations of the nation on Republic Day and was bound to create a massive law and order situation,” the application said.

It said such a protest would cause an “embarrassment to the nation.”

“The right to protest can never include maligning the nation globally,” the government said. Seven major routes leading to Delhi were fully blocked and four partially blocked, it said.

Attorney General K.K. Venugopal, for the Centre, said there was no question of a huge group of one lakh people entering the city on Republic Day. “We cannot say where all they will go,” he said.

“It should be within the power of police to see a specified number of people enter unarmed,” the CJI replied.

The court order noted the “stout denial” made by senior advocate Dushyant Dave on Monday about any intention to disrupt the Republic Day celebrations. Mr. Dave had said that “at least one member of the family of each of the farmers from Punjab is in the Army and that they would not disrupt the Republic Day celebrations.” However, Mr. Dave and three other lawyers, representing some protesting farmers’ bodies, the court noted in its order, were absent at the hearing on Tuesday.

The Bench, which stayed the implementation of the farm laws and formed a four-member expert committee to negotiate between the farmers and the government, has also suggested moving the protest sites from the Delhi borders to a place where the agitation did not hamper public movement in the National Capital.

Addressing this issue, senior advocate Vikas Singh said protests could not be held at a place away from public sight. “If farmers don’t get a prominent place to protest, then they can go on protesting indefinitely without anyone noticing the protest. Everybody is saying Ramlila Maidan. Right from Independence, that has been the traditional place of protest in this city,” Mr. Singh said.

He even suggested the Boat Club area as an alternative.

The court said matters of law and order were best left to the police. “Has any organisation made an application for permission for protests in Delhi?” the CJI asked.

Mr. Singh said he would check on that.