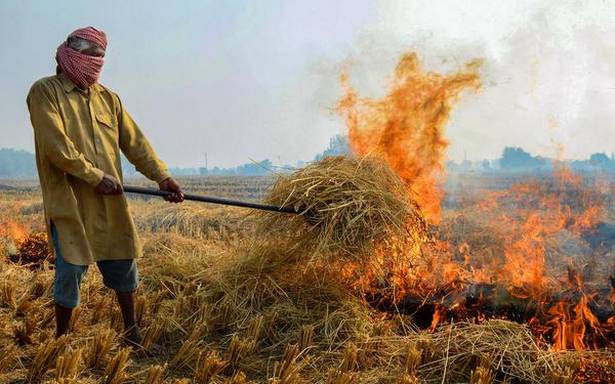 It has become a fashion to blame the farmers for air pollution: Justice Surya Kant

Supreme Court judge Justice Surya Kant on Saturday said he is a farmer and Chief Justice N.V. Ramana hails from a farmer family and they know that poor and marginalised farmers in northern States cannot afford to buy machinery for stubble management.

"You are saying two lakh machines are available, but the poor farmers cannot afford these machines. After the agrarian laws, the landholding in UP, Punjab and Haryana is less than 3 acres. We can’t expect those farmers to purchase those machines," Justice Kant told Solicitor General Tushar Mehta.

"Why can’t the Centre and the state governments provide the machines. Take away the stubble for use in paper mills and various other purposes. In winters the stubble can be used for fodder for goats, etc. in Rajasthan," he said.

The apex court was hearing a plea filed by environmental activist Aditya Dubey and law student Aman Banka, who sought directions to provide stubble-removing machines to small and marginal farmers for free.

Mr. Mehta, appearing for the Centre, told the top court that these machines are being made available at 80% subsidised rate.

The top court judge asked Mr. Mehta that can the officials assisting him point out the actual price after subsidy.

"Can the farmer afford it. I am a farmer and I know it, the CJI is also from a farmer family he also knows it and my brother (judge) also knows it," Justice Kant, who was sitting as part of a special bench headed by Chief Justice of India N.V. Ramana and also having Justice D.Y. Chandrachud, said.

Justice Kant also said it has become a fashion to blame the farmers for air pollution.

Justice Kant also demanded whether other measures such as firecracker ban and vehicular emission control were implemented.

"Be the petitioners, the Delhi government or anybody else — it has become a fashion to blame the farmers. Have you seen how crackers are being burnt in Delhi for the last seven days? What was the Delhi police doing?" he asked.

The observations came after senior advocate Rahul Mehra, appearing for the Delhi government, mentioned the issue of stubble burning.

The apex court has asked the Centre to hold a meeting with stakeholders and revert on Monday.