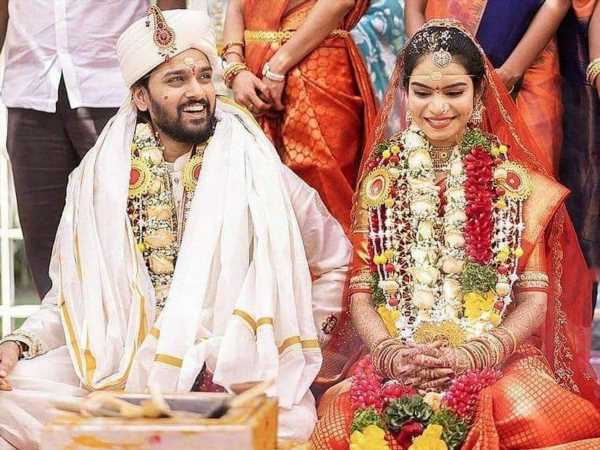 Sumanth Ashwin and Deepika Raju are now husband and wife. Sumanth Ashwin, the son of producer and filmmaker MS Raj,  tied the knot with research scientist Deepika Raju on Saturday morning at a farmhouse in Hyderabad city.

On the occasion of his wedding, he wore a traditional white pancha and dhoti, with a turban on his head whereas bride Deepika looked radiant in a traditional red saree, with gold jewellery.  They were looking very happy while taking blessings from loved ones, including friends and family.

Sumanth Ashwin made his debut with the film Tuneega Tuneega, under his father’s direction which was released in 2012. Later he acted in few movies like Ketintha and Columbus. His popular movies are  Happy Wedding and Prema Katha Chitram 2.

The sources say that MS Raju’ son Sumanth met Deepika Raju at a wedding last year.  After his love story, Sumanth said, “I have never met anyone who’s as warm as her. She even invited me to spend  the festival of Sankranthi with her family and I just knew I had fallen head over heels for her. After spending some time with Deepika, I just knew she is the one. She is the closest thing to perfection for me.”