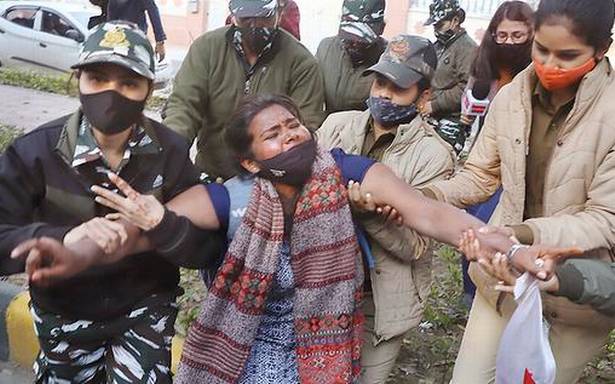 Over 50 students were detained after a call was given to protest at Karnataka Bhawan, in New Delhi’s Chanakyapuri on Thursday, against the ongoing hijab row in Karnataka, police officers said.

While protesters were supposed to gather outside the Karnataka Bhawan at 3 p.m., most of them were detained before they reached the protest spot. The police picked them up from areas near Assam Bhawan and Odisha Bhawan and took them to Mandir Marg police station in police buses. The students are affiliated to several student organisations, including the All India Students Association (AISA), the Students’ Federation of India (SFI) and Krantikari Yuva Sangathan.

The police said that the students were detained for nearly two hours at the police station and let go around 6 p.m. Some student protesters alleged “manhandling” and “assault” at the hands of police officers. However, the police denied the allegations, saying that “no force” was used against the students.

The protest was called by student organisations against the “communal targeting” of Muslim women students and the “attack on women’s autonomy” in colleges and schools of Karnataka. Several students also raised slogans condemning the ‘hijab ban’ imposed by schools in Karnataka.

While being detained, one of the student protestors from SFI said, “We were holding this protest to raise our voices against the saffronisation of the education system in Karnataka that has already been happening ever since the ruling party came to power”.

N. Sai Balaji, national president, AISA, who was also detained by the police, said that the agenda behind the protest was to raise concerns regarding curbing the autonomy of women and the choice of clothes they wear. “In addition to questioning women’s autonomy, the issue is being communalised and no State or national leader has condemned the incident so far,” the student leader said. He asked why only the hijab was being questioned and not other religious symbols like tilak or turban.