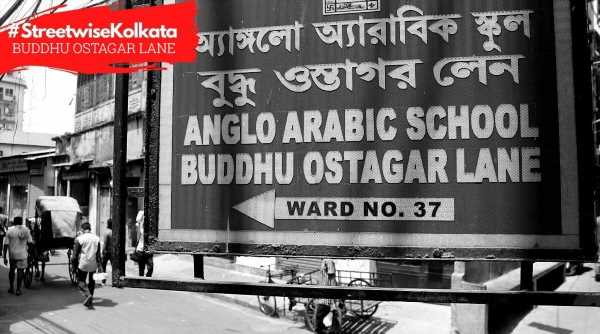 The West Bengal Commission for Backward Classes lists the Ostagars as a ‘backward class’ in the state and mentions that the community’s traditional occupation has been “tailoring in its different forms and standards”. Nobody knows who Budhu Ostagar was, but the man was clearly somebody prominent in Calcutta’s history to have a street named after him.

To find Budhu Ostagar Lane, also spelled ‘Buddhu Ostagar Lane’, a stone’s throw from Sealdah railway station, one must search inside the labyrinthine bylanes of the Baithakkhana neighbourhood in central Kolkata, turning off Google Maps and instead, asking locals for directions.

Approximately 300 meters in length, it takes not more than four minutes to get from one end of this lane to the other. Like purono Kolkata’s many bylanes, Budhu Ostagar Lane too is so narrow that two people standing beside each other with their arms outstretched would easily touch the walls on both sides.

The results of modern construction slowly swallowing Kolkata seem to have only brushed past this lane, leaving most of its old buildings untouched. Slatted windows, wooden panes, and narrow rowaks are still visible in most homes here, built in the tropical colonial style, now becoming a rare sight in this rapidly developing city. Many of Kolkata’s older neighbourhoods and streets are named after the communities and the occupation of people who lived there and this lane may have been similarly named. The West Bengal Commission for Backward Classes lists the Ostagars as a ‘backward class’ in the state and mentions that the community’s traditional occupation has been “tailoring in its different forms and standards”.

“The Ostagar is a small entrepreneur whose superior skill in cutting clothes earns him the sobriquet of Ostagar,” says an undated report by the Commission.

There were no records immediately available that indicate when this neighbourhood came to be associated with the Ostagar community, but it is possible that most tailors here ran their own independent small businesses. One of the first large-scale tailoring enterprises in the city, Ranken & Co., was first established in 1771, very different from the operations that were being run by locals in the city, and catered primarily to the British and others who could afford it. A look through older maps of Calcutta indicate that narrow bylanes with similar names were dotted in small clusters in other parts of the city; Miajan Ostagar Lane Kolkata, Rahim Ostagar Lane, Sariatulla Ostagar’s Lane, Gulu Ostagar Lane, for example. Given their indispensable work, these street names suggest that the Ostagar communities were spread across the city in various neighbourhoods till gentrification changed their characteristics and demographics.

The tailors of Budhu Ostagar Lane have left the neighbourhood and nobody there knows who the man who gave the bylane its name was. Budhu Ostagar may have been a prominent tailor or member of his community or perhaps someone who had found patronage among the city’s wealthy and distinguished who petitioned for the city’s administration to recognise Ostagar’s work by honouring him this way.